Capcom kicked off its FY2021 period with a massive spike in game sales. Q1 net sales revenue was up 104% to 48.2 billion yen, driven by a staggering 13.3 million games sold during the period. Resident Evil made up over half of these quarterly sales with 7 million units sold digitally and physically.

Taking a closer look at Capcom's top 5 franchises and we see clear trends that help define the company's long-term business. While the new RE Village mostly made up total RE sales growth, Capcom did sell a bunch of older games like RE5, RE6, and RE7. Meanwhile, sales of Monster Hunter World have slowed down to 500,000 units during Q1, bringing total game sales to 17.3 million.

Here's a snapshot of major franchise growth during Q1'21:

The remainder is made up of a number of older games that weren't disclosed on the Platinum Sellers page. 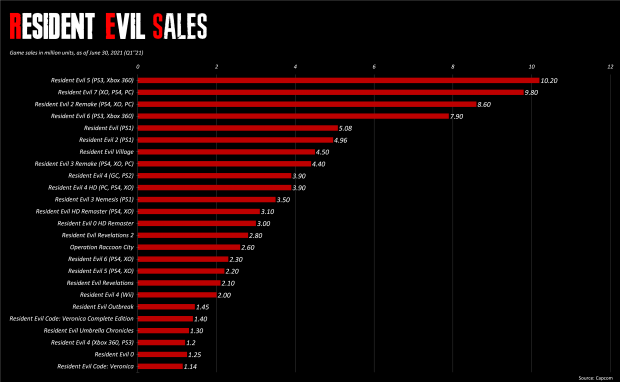