The Coalition flexes the Xbox Series X's raw console power and pushes the 12TFLOP RDNA 2 GPU and Zen 2 CPU to its limits.

Gears of War developer The Coalition has been setting benchmarks on the Xbox Series X since the get-go. Before the system launched, the devs managed to get Gears 5 running at Ultra PC equivalent presets on the Series X with Unreal Engine 4, complete with new global illumination effects. Now they're setting sights on Epic's new potent Unreal Engine 5.

In its recent Alpha Point tech demo, The Coalition managed to get 100 million+ triangles running flawlessly on the Series X with real-time light and reflections thanks to Unreal Engine 5's new toolsets. The results deliver an incredible look at the potential of next-gen gaming. The devs are careful to say Alpha Point does not represent any commercial product; it's merely an illustration on what's possible on the Xbox Series X. And things are still very early. Microsoft's internal first-party teams are busily testing, experimenting, and iterating on console software, SDKs, and games engines in exciting ways to help redefine what's possible on the Series X.

The devs are taking full advantage of UE5's breakthrough Nanite geometry virtualization technology, which allows developers to inject cinematic-level textures into scenes with minimal costs. Game developers have a budget (memory allocation, hardware capabilities, graphics, etc) and Nanite basically helps them reduce their bills so they have more money to spend on fun stuff like frame rates, expanded environments, and other game-defining things.

"Some of these assets are tens of millions of triangles for an individual asset. We're talking about entire scenes made up of billions and billions of triangles," said Epic VP of Engineering Nick Penwarden. "They were able to just make the art in whatever made the most sense to them, import it, and let the engine handle the details."

"Previously, artists would start with a really high-resolution asset and bake it down to a low-poly model and generate a normal map out of it. Ours don't have to do that step any more and it's all done by Nanite," said Graphics Technical Director Daniel Wright. 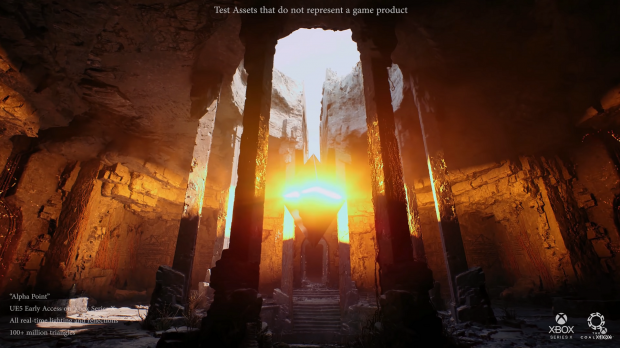