All NewsBusiness, Financial & LegalCases, Cooling & PSUContests & GiveawaysCPU, APU & ChipsetsDealsDisplays & ProjectorsGamingMotherboardsScience, Space & RoboticsStorageVideo CardsVirtual & Augmented Reality
All ReviewsAll ArticlesAudio, Sound & SpeakersCases, Cooling & PSUCPUs, Chipsets & SoCsComputer SystemsDisplays & ProjectorsGamingMotherboardsNetworkingPeripheralsRAMStorageVideo Cards
GuidesGamingAsk the ExpertsNewsletterAboutForums
RTX 3090 TiRTX 4090Diablo 2GTA 6Halo InfiniteElon MuskRTX 3080HDMI 2.1
Hot on the heels of the Creative Zen, Sandisk has announced its latest MP3 player, the Clip. We really dig these simple, easy to remember names and this looks like another quality MP3 player from Sandisk. It looks like Sandisk is also taking on the two heavy weights in the MP3 player market, as the Clip goes up against the iPod Shuffle and the Creative Stone. It's definitely not a lot bigger in terms of physical size, but it's quite feature packed none the less. 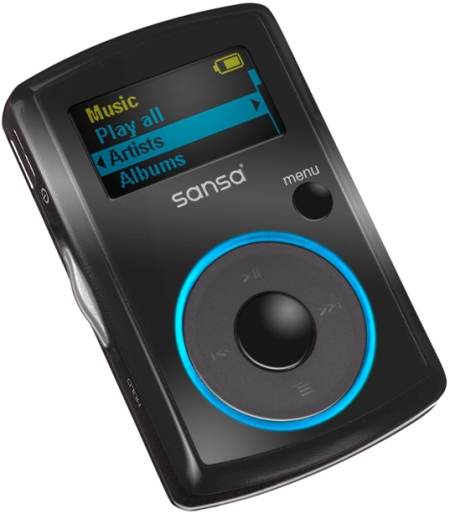 Sandisk has managed to squeeze in a rather small OLED display as well as an FM radio with 40 presets and a voice recorder. Sandisk claims up to 15h of play time, although the radio should last longer. The Clip connects to your PC via USB 2.0 and the player has a mini USB port on its side. It is supplied with a belt clip, a USB 2.0 cable and a pair of headphones.