All NewsBusiness, Financial & LegalCases, Cooling & PSUContests & GiveawaysCPU, APU & ChipsetsDealsDisplays & ProjectorsGamingMotherboardsScience, Space & RoboticsStorageVideo CardsVirtual & Augmented Reality
All ReviewsAll ArticlesAudio, Sound & SpeakersCases, Cooling & PSUCPUs, Chipsets & SoCsComputer SystemsDisplays & ProjectorsGamingMotherboardsNetworkingPeripheralsStorageVideo Cards
GuidesGamingAsk the ExpertsNewsletterAboutForums
Windows 11Halo InfiniteBattlefield 2042Elon MuskGTA 6RTX 3080HDMI 2.1Bitcoin Mining
Creative has launched a new PMP, simply named the Zen. Creative claims that it is credit card sized, but this does of course not apply to its thickness, as it measures 55 x 83 x 11.3mm (DxWxH) and it weighs 65g. The Zen features a 2.5-inch LCD display which supports 16.7 million colours. It's the first MP3 player from Creative that supports AAC and possibly the only one that doesn't start with an i and end with Pod that supports the iTunes Plus tracks. It also supports DivX, Xvid, MPEG4-SP, MJPEG (commonly used in digital cameras) and WMV9 video formats, although it only supports the latter two without transcoding and let not forget MP3 and WMA for audio and JPEG for images.

The Zen will be available in three different sizes and the price changes accordingly. At a fairly affordable US$149.99 you'll get 4GB, at $199.99 you'll get 8GB and at $299.99, the top of the range 16GB model. If this still isn't enough space, you might find the inclusion of an SD card slot useful, which allows you to add further storage, although there was no mention of SDHC compatibility in the press release. 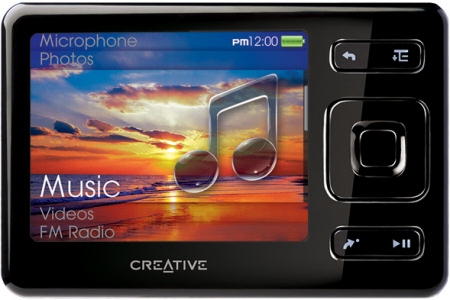 Creative claims that the built in rechargeable battery is good for some 5h of video or 25h of music playback. The Zen also packs a built in FM radio with 32 presets, a voice recorder function, a built in organizer, a to do list and a calendar, all three of which happily syncs with Outlook.

A range of accessories will also be available, including a range of cases, coloured skin packs, screen protectors and a car charger. You can find out more by heading over to the official product page found here
Newsletter Subscription