Sir Richard Branson recently took the VSS Unity to what was called "space", but now astrophysicist Neil deGrasse Tyson has said its technically not "space". 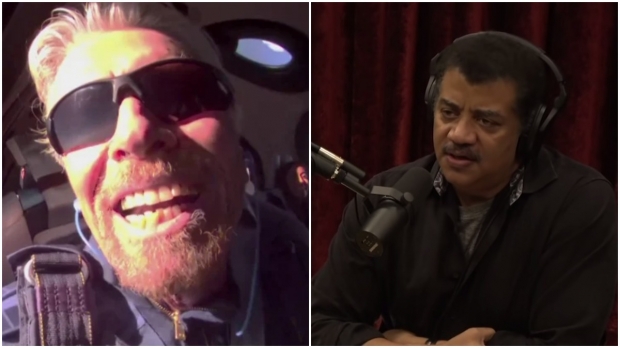 On Sunday, Branson took the first tourist space flight in history aboard the VSS Unity. After reaching an altitude of 9 miles the spacecraft released the spaceplane which then blasted its way to 50 miles altitude. Now, here's where things get technical. The pilots aboard the VSS Unity welcomed all passengers on board to "space", however, deGrasse Tyson says technically Branson as well as Bezos won't reach "space".

Tyson spoke to CNN and said,

"I am delighted that this is a new tourist attraction. I have no problem or doubt with celebrating this fact. It should have happened decades ago, it didn't take 60 years for a private company to end up doing what NASA did in 1961.

It's okay if you want to call it 'space', because average humans haven't gotten there before and it's a first for you. That's why it takes eight minutes to get into orbit and three days to reach the moon. That is actually space travel. So I don't see it as 'oh, let's go into space'. No. What you are going to have is a nice view of the Earth.

I don't even know if you're going to see the curvature. I did some calculations and I think not. If you are 2 millimeters from the surface of this globe, you don't have the full perspective. It is a visual effect that you get from 50 miles up (about 80 kilometers). So have fun."

Cosmic Queries: StarTalk's Guide to Who We Are, How We Got Here