Sir Richard Branson has become the first billionaire to enter space aboard Virgin Galactic's VSS Unity, and in the video below, we can see a quick game of "human volleyball" being played.

The above video has been released onto the Virgin Galactic YouTube channel and shows the VSS Unity with two pilots and four mission specialists, including Richard Branson. The video begins with a quick look at the SpaceShipTwo VSS Unity reaching altitude, with the pilots announcing to the individuals on board, "welcome to space".

When the space plan reached an altitude of 50 miles, Branson begins a motivational speech aimed at "all you kids down there, I once was a child with a dream looking up to the stars. Now, I'm an adult in a spaceship." As Branson is giving this speech, the crew becomes weightless, and we can see the other passengers on the space plane to start to play a quick game of "human volleyball," with one passenger being the "ball" being passed backward and forwards.

Branson continued and said, "If we can do this, just imagine what you can do". He then proceeded to unbuckle himself and soak in amazement, saying, "Oh my God. This is just too unbelievable." 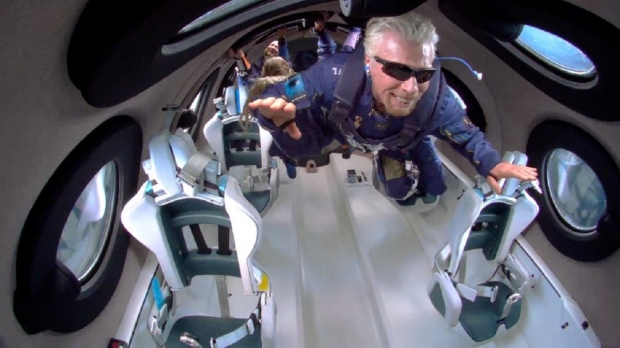