Approximately 85% of the known universe is dark matter, or at least that is what scientists believed until a new galaxy was discovered. 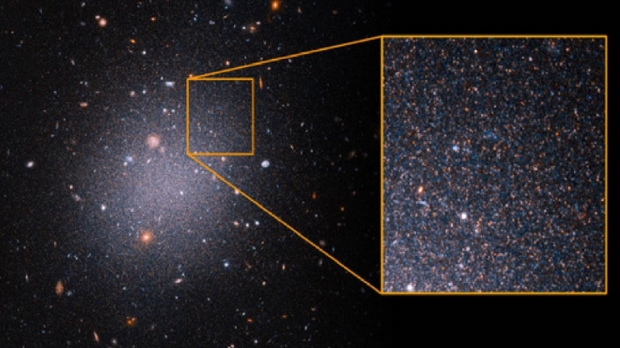 Previously it was difficult to believe that galaxies being conceived without any dark matter would be impossible, or at least incredible rare. But, the Hubble Space Telescope has been used to make a discovery of a galaxy that lacks dark matter, confusing scientists more about how galaxies are exactly born.

Zili Shen and Pieter van Dokkum of Yale University and Shany Danieli, a NASA Hubble Fellow at the Institute for Advanced Study, was the team behind the study, and according to the study, the team measured the distance of NGC1052-DF2 (DF2) and found that it was 22.1 +/-1.2 megaparsecs. The results indicated that the galaxy lacked dark matter. Additionally, results from another study published back in 2019 found that a neighboring galaxy called NGC1052-DF4 (DF4) also lacked dark matter.

Danieli said, "Determining an accurate distance to DF2 has been key in supporting our earlier results. The new measurement reported in this study has crucial implications for estimating the physical properties of the galaxy, thus confirming its lack of dark matter."

Dokkum said, "We went out on a limb with our initial Hubble observations of this galaxy in 2018. I think people were right to question it because it's such an unusual result. It would be nice if there were a simple explanation, like a wrong distance. But I think it's more fun and more interesting if it actually is a weird galaxy."

Shen stated, "There's a saying that extraordinary claims require extraordinary evidence, and the new distance measurement strongly supports our previous finding that DF2 is missing dark matter. Now it's time to move beyond the distance debate and focus on how such galaxies came to exist."