We're in the middle of the greatest graphics card shortage of all time, and here we are teasing Intel's upcoming Xe-HPG gaming-focused card based on the Intel DG2 family of GPUs.

Intel's upcoming Xe-HPG PCB has been leaked, teasing what happens underneath of the board in its evaluation and testing phase. This is an engineering sample and will look nothing like the final retail cards will look like, and I'm sure they won't even look anywhere near as good as those concept images from when Chris Hook was running things.

Tom from Moore's Law is Dead teased the PCB, showing that it's quite a long card in its engineering sample form. There's plenty of details here, with this being the 512 Execution Units (EUs) version of Intel Xe-HPG, which will be joined by 384 EU and 128 EU versions of the card.

Tom says that the 512 EU model is boosting above 2.2GHz at the moment, has 16GB of GDDR6 on a 256-bit memory bus, and the target TDP is under 235W. Tom also notes that Intel originally designed the GPU for TSMC and its new 6nm node, but he "cannot rule out that it may have been moved to N7P".

As for performance, we're told to look at the Intel Xe-HPG in its 512 EU form to compete with NVIDIA's current-gen GeForce RTX 3080... on the eve of NVIDIA's reveal of the GeForce RTX 3080 Ti, that is. As for ray tracing performance, Tom says his sources tease that RT is "competitive" at the moment. 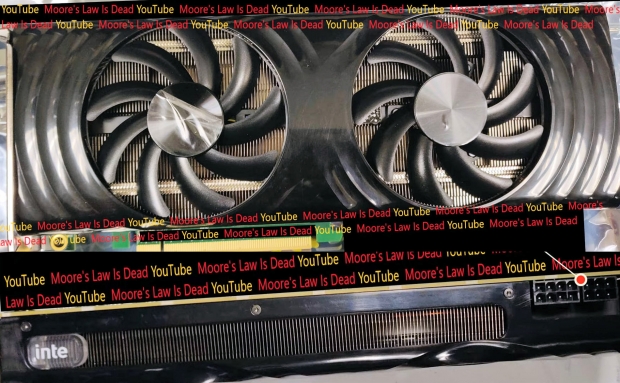 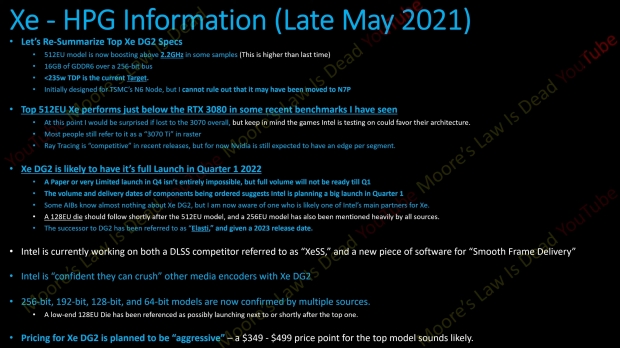