Electronic Arts plans to spend big on research and development as it "leans heavily" into its biggest mega-budget franchises. 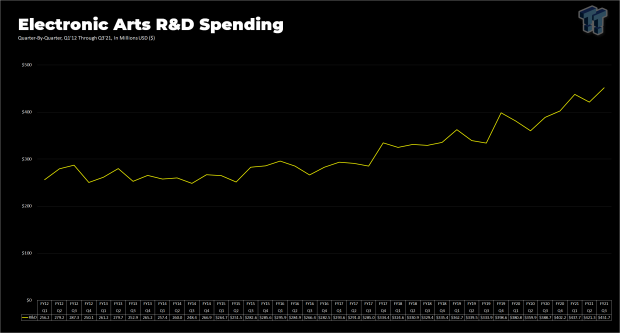 EA is gearing up for a huge FY2022 with guidance of $7.3 billion net bookings and an all-time high of $6.8 billion in revenues. A slew of live service-powered digital games will spark this growth, including a myriad of annualized EA Sports titles like FIFA, Madde, NHL, and the new PGA Tour, as well as heavy-hitting billion-dollar shooters like Apex Legends and Battlefield.

These new games will also be cross-gen releases that launch on both PS4/Xbox One as well as next-gen PS5 and Series X platforms for maximum exposure, availability, and monetization potential. This acceleration is made possible by higher R&D spending from EA, which reached its highest point in history in FY2021. 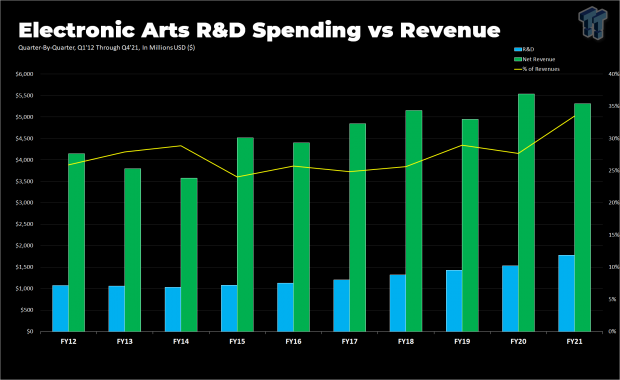 EA's R&D spending is proportional to its net revenues for the period; the more revenue it makes, the more it spends on R&D. FY2021 was a record period for revenues so it was also a record year for R&D spending.

According to EA's financials, the company spent a total of $1.7 billion on R&D, which includes significant optimizations in its internal Frostbite engine technologies as well as sever infrastructures and other experimental tech as part of its SeeD division (machine learning, AI, etc.). 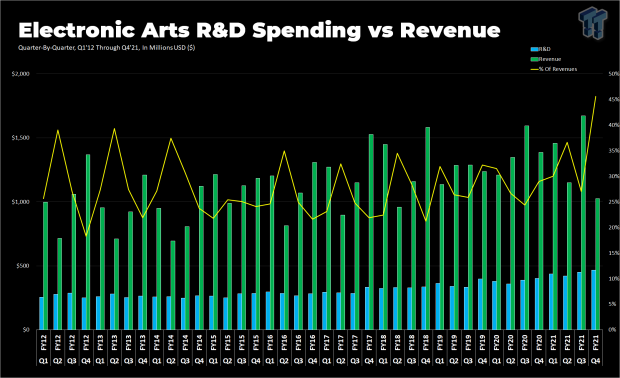 EA's R&D spend vs revenue ratio on a quarter-by-quarter basis. Q4'21 had the highest quarterly R&D spend in history and a 46% ratio.

Remember that R&D isn't just for heavy-hitting premium releases. EA is embracing a huge new three-part plan that puts emphasis on mainline games, mobile ports, and new engagement/business models. This R&D spend is used across all facets of its business.

FY2022 is expected to deliver record $6.8 billion net revenues and we should expect this year's R&D spend to likewise increase to record highs.