All NewsBusiness, Financial & LegalCases, Cooling & PSUContests & GiveawaysCPU, APU & ChipsetsDealsDisplays & ProjectorsGamingMotherboardsScience, Space & RoboticsStorageVideo CardsVirtual & Augmented Reality
All ReviewsAll ArticlesAudio, Sound & SpeakersCases, Cooling & PSUCPUs, Chipsets & SoCsComputer SystemsDisplays & ProjectorsGamingMotherboardsNetworkingPeripheralsStorageVideo Cards
GuidesGamingAsk the ExpertsNewsletterAboutForums
Chia Coin MiningRTX 3090RTX 3080RTX 3070HDMI 2.1Bitcoin MiningBattlefield 6
RAM
Sparkle has released a new card under its Calibre brand, the P850+ which is based on a GeForce 8500 GT GPU. This in itself is hardly exciting, but the fact that the P850+ comes with 512MB of GDDR3 memory makes this a much more appealing card. It's one of the first GeForce 8500 GT based cards with 512MB of GDDR3 memory and Sparkle's Calibre series comes factory overclocked. 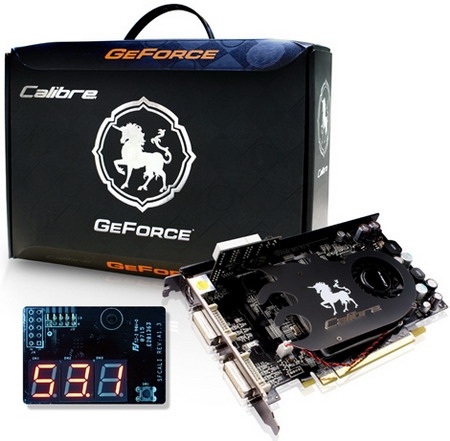 To further sweeten the deal, the Calibre P850+ comes with Sparkle's GDP or Graphics Display Port, which is a small daughter card with an LED display on that shows real time GPU and PCB temperatures. Sparkle has also fitted what it calls VRT or VGA Rectifier Technology. This is more of a marketing gimmick than anything else, but the card has a metal bar that runs across the top of the card that is meant to prevent it from bending due to high temperatures.

No price has been announced as yet, but this is looking like it's going to be one of the best GeForce 8500 GT cards out there, for now. You can find the official press release here
Newsletter Subscription