The Borderlands franchise has sold a whopping 60 million copies worldwide since 2009, Gearbox has confirmed. 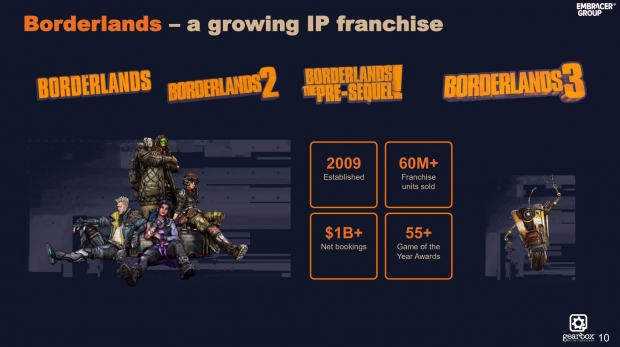 Following Embracer's acquisition of Gearbox for $363 million, a new company profile reveals some interesting stats on the developer and its games. The Borderlands IP has sold over 60 million copies to date across four mainline games, and has generated over $1 billion in revenues. Roughly 1/6th of these sales came from Borderlands 3, which has now crested 10 million shipments globally. In total, Gearbox Entertainment's games have sold 100 million units combined.

With numbers like these, it's no surprise that Borderlands 4 is in development. Gearbox could receive a huge $1 billion bonus if it delivers Borderlands 4 in the next six years. Details are sparse, but we know 2K Games will publish Borderlands 4, and it's possibly being developed with Unreal Engine 5.