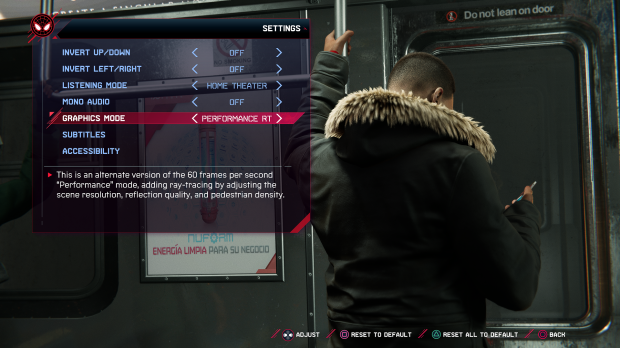 The new Spider-Man Miles Morales update clocks in at 261.9MB and brings a Performance RT mode, offering ray-traced 60FPS gameplay. RT with 60FPS is a pretty big deal for consoles, but Miles Morales runs at a lower resolution with this mode on. We're not exactly sure what resolution the game can hit with the perf setting enabled.

The mode does also seem to significantly lower the pedestrian density in Manhattan. Our tests show a markedly reduced AI character count while re-loading the game in Performance RT. The mode's description warns this will happen though: "This is an alternate version of the 60 frames per second "Performance" mode, adding ray-tracing by adjusting the screen resolution, reflection quality, and pedestrian density."

The ray-traced effects don't seem to have changed all that much and they still look fantastic for consoles.

So far the game has three modes:

Spider-Man Miles Morales is one of the best-looking and best-playing console games ever made, and is a next-gen spectacle on the PS5. We're thrilled about being able to play it with a new dimension of visual and gameplay performance.