NewsReviewsArticlesGuidesGamingAsk the ExpertsNewsletterForums
GIVEAWAY: Sabrent Rocket Q 8TB NVMe PCIe M.2 SSD worth $2000!
Video Cards
Nvidia has launched its latest mobile GPU, the 8700M GT, which is its top of the range GPU in the GeForce 8M series, for now. It has 32 stream processors, just as the 8600M GT, but the core clock is up from 475MHz of the 8600M GT to 625MHz. The shader clock has been increased from 950MHz to 1,250MHz and the memory has also been given a boost from 700MHz to 800MHz. Nvidia is also using something it calls dual-rank 128-bit memory, although we're not quite sure what this does at the time of writing this, but it sounds like some kind of dual channel memory interface. It can be paired with up to 512MB of GDDR3 memory. 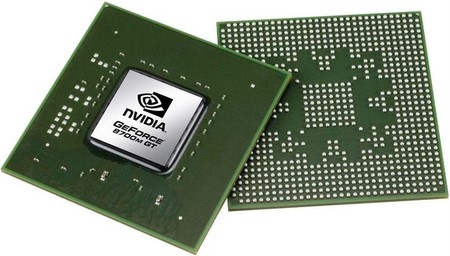 The memory bandwidth is up from 22.4GB/s to 25.6GB/s and the texture fill rate has been improved from 7.6 billion instructions per second to 10 billion instructions per second. The 8700M GT is between 27 and 70 per cent faster than the older 7950 GS mobile part. It is manufactured at an 80nm processor and has a TDP of 35W. It features PureVideo HD and Nvidia's PowerMizer technology.