Godfall, the new PlayStation 5 looter-slasher coming in 2020, won't have microtransactions or monetization.

Godfall looks like prime territory for microtransactions. It's an action-based third-person combat game with heavy emphasis on gear progression and customization, and it also feature online 3-player co-op. There's lots of weapons to collect across five classes, and a number of valor plate armor sets to unlock. These things are typically hallmarks to any service-driven live game, and on the surface, Godfall looks like a great fit for cosmetic mTX. But Counterplay promises the game won't have any form of in-game purchases. Godfall is a complete package, the developer says.

"Godfall is a complete package. All of the gear and items in the game are acquired and unlocked through gameplay. There are no microtransactions. No waiting for content. It's all in the game, day one," Godfall game director Keith Lee said in a recent gameplay video.

With Godfall, Counterplay aims to solidify the looter-slasher genre. Think of it like Dark Souls mixed with Diablo, complete with some Sekiro-esque skill-based combat thrown into the mix.

"The game is one-part loot-driven, and one-part player skill driven. Not only do we want you to find exquisite weapons with powerful loot traits, we also want you to have that feeling of accomplishment of mastering the wide set of combat mechanics available to you in Godfall," Lee said in the video.

Furthermore, Godfall has a bunch of weapons. There's five weapon classes, each with their own varying rarities and traits.

Godfall will release as a PlayStation 5 launch game later this year. 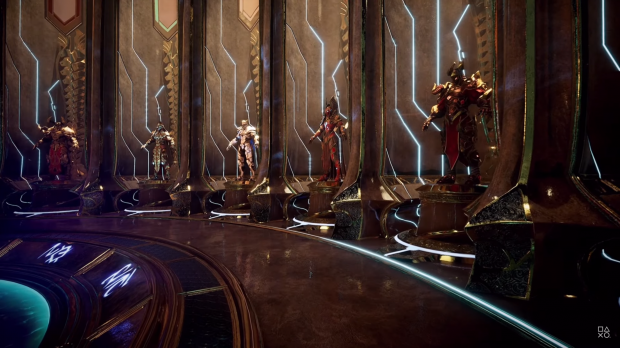