Ubisoft has taken to its social media to announce that its new battle royale shooter will be leaving open beta and enters its first official season.

According to the Hyper Scape Twitter account, the free-to-play battle royale will be leaving open beta on PC on August 2nd. The Ubisoft website says that all progression made throughout the open beta will be crossed over to the full release of the game. Additionally, Ubisoft has also announced that Hyper Scape will be making its way over to the PS4 and Xbox One on August 11th.

Season 1 will come with a slew of new changes, some of which include a new gun, the Dragonfly, a new hack, and a Magnet. Season 1 is titled "The First Principle", and will be adding new limited-time game modes, as well as new features for Crowncast (Hyper Scape's interactive Twitch extension). Season 1 will also come with some lore insight into how the world of Hyper Scape came about. If you are after more information on the first season of Hyper Scape, check out this link here. 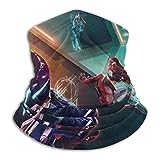