Like pretty much every games company, EA is benefiting tremendously from COVID-19 lockdowns, and their recent Q1'21 earnings reflect strong spikes in overall earnings. 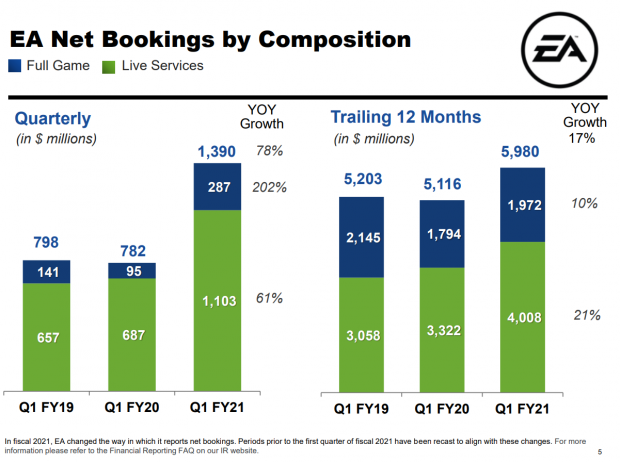 Today EA reported record first-quarter results for Fiscal Year Q1'21 that far exceeded the company's expectations. In the quarter ended March 31, 2020, EA generated $1.459 billion in total revenues, up 21% from last year. Net bookings were up tremendously by 78% YoY to $1.390 billion, outperforming EA's forecast by $390 million, driven by astronomical growth in full game sales and live service monetization. Free cash flow is up 286% to $340 million on these strong results.

Full game sales are up triple digit percentage points to $287 million (+202% YoY), which were driven in part by EA's fusillade of re-releases on Steam and strong console purchases. This reflects increased consumer purchases during COVID-19 quarantines. Q1 is typically EA's slowest period for game sales.

Monetization and live services likewise saw a spike by 61% YoY to $1.103 billion. Live services made up nearly 80% of total net bookings and nearly 75% of total quarter revenues.

EA FYQ1'21 earnings at a glance 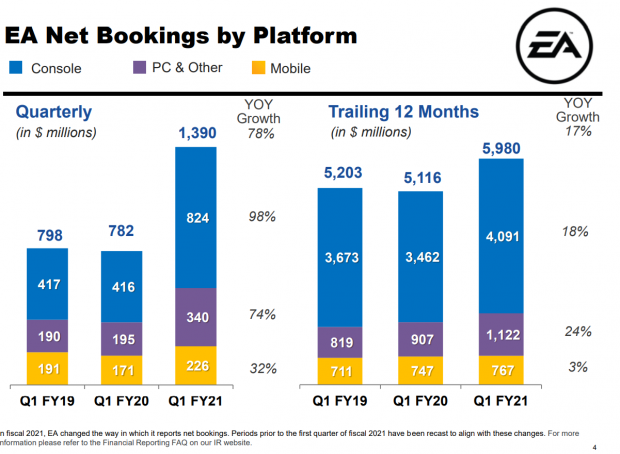 Console earnings rose the most during Q1. In the period, EA's console net bookings earnings skyrocketed by 98% YoY to $824 million.

Guidance for FYQ2'21 sees a decline in overall revenues. EA expects to make $1.125 billion in net revenue in Q2' down 22% from Q1's strong earnings. Operating expenses are expect to jump by $55 million, and the tax benefits EA enjoyed will wear off in Q2, which will lower net income to $61 million.

For the total Fiscal Year 2021, which includes a number of high-profile AAA games, EA expects to make $869 million in net income on $5.6 billion in revenues. This is an increase of over $400 million, and EA's CFO Blake Jorgensen says the company has only ever raised guidance after Q1 a single time in the company's history.