Today EA made good on its promise and brought a ton of back catalog PC games over to Steam. This is just the beginning, and new PC games are also dropping on Valve's platform. 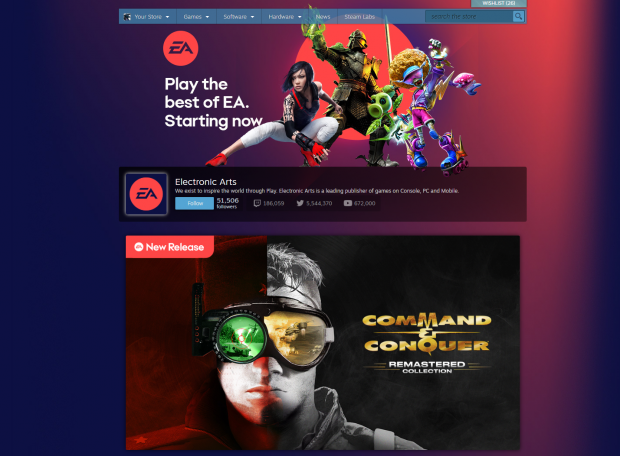 For the longest time, EA locked its PC games behind its own storefront-and-service ecosystem. But now that's all changed. EA is now eager to tap Steam's massive 95 million userbase and wants to maximize sales.

Increased sales by boosted availability is the main motivation behind the big Steam push. Today EA dropped over 25 of its best-selling PC games on Steam, including yesteryear hits Dragon Age 2, Dragon Age: Inquisition, a handful of Need for Speed games, and many more that're also on sale. The bigger news is EA confirming all future PC games would simultaneously launch on Steam as well.

"New EA games developed for PC will also launch on Steam alongside other platforms, including the Command & Conquer Remastered Collection which launches tomorrow," EA said in a press release.

EA is also dropping its Origin Access all-you-can-play service on Steam too, which is a very interesting move. This kind of service was previously only available on Xbox One and PS4, but a launch on Steam will directly compete with the PC version of Xbox Game Pass.

All of this is part of EA's plan to maximize sales revenue and buffer earnings with catalog game sales.