In the video above, the US Navy has its USS Portland testing "the first system-level implementation of a high-energy class solid state laser". The laser disables a drone mid-flight, where you can see in the second half of the clip the drone burning from being hit by the laser.

We don't know how strong the laser itself is, but according to a report published in 2018 from the International Institute for Strategic Studies, it's expected to be at least a 150-kilowatt laser. That's some serious laser weaponary right there, but the US Navy hasn't provided any specifics.

In a statement, Capt. Karrey Sanders, commanding officer of Portland explained: "By conducting advanced at sea tests against UAVs and small crafts, we will gain valuable information on the capabilities of the Solid State Laser Weapons System Demonstrator against potential threats".

Capt. Sanders continued: "With this new advanced capability, we are redefining war at sea for the Navy. The Navy's development of DEWs like the LWSD provide immediate warfighter benefits and provide the commander increased decision space and response options".

This isn't the first time that the US Navy has tested a laser weapon system, where in 2017 there was a live-fire exercise of a 30-kilowatt laser system by the USS Ponce in the Persian Gulf. This new system is 5x more powerful at 150-kilowatt, which is pretty damn insane. 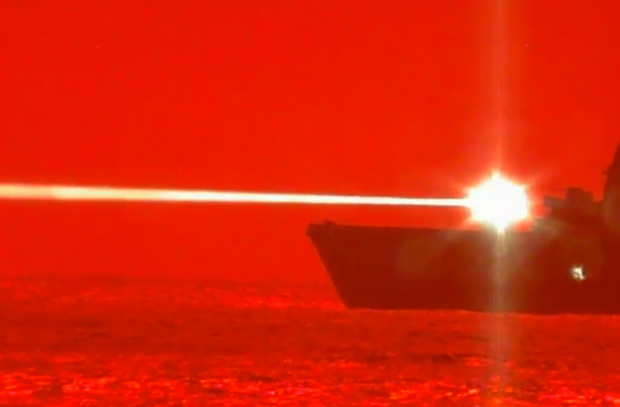