Respawn Entertainment is ramping right into the third season of Apex Legends, launching a new trailer for S3 which has been dubbed Meltdown. Check it out:

World's End rocks an awesome fire-and-ice theme with a moveable train with loot on it, and plenty of surprises in store. There will be a bunch of smaller cities, and a huge tower that is covered in ice and gives me the same feels as Superman's iconic Fortress of Solitude.

Here's what you can expect from Season 3 of Apex Legends: 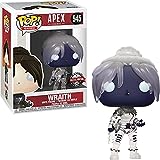