Rockstar Games now has a games launcher that'll gate off its titles on PC, and you'll get a free copy of San Andreas if you download it now.

Today the GTA-maker rolled out the Rockstar Games Launcher as a means to tightly unify and control its games on PC. The launcher comes with GTA: San Andreas 100% free, and requires Social Club in order to access and play specific games. All digital rights are tied to this account. The launcher clocks in at roughly 1GB and includes built-in cloud saves.

Interestingly enough, you'll now access newer games right from the launcher. Games like GTA V and Max Payne 3 can't be launched from Steam and can instead only run from the Rockstar Games Launcher.

This move might hint at an impending Red Dead Redemption 2 release on PC. It's also a storefront that sells Shark Cards and Rockstar's own games, so expect to see all of Rockstar's future titles to be 100% exclusive to the launcher. That means RDR2 on PC probably won't be sold on Steam or the Epic Games Store.

Rockstar can cordon its games with a built-in DRM framework via the launcher to protect its games, but more importantly, to fully control and compile all data gleaned from online components like RDR Online and GTA Online. 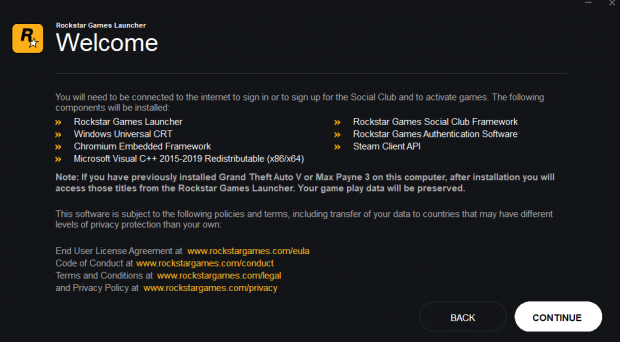