Like every Japanese publisher, Capcom loves re-releasing its classic games in collections. We've already seen 10 old-school Mega Man games bundled in the Legacy Collection and now we're getting the Zero and ZX games in a $30 SKU. The new Mega Man Zero/ZX Collection sports six games and will launch both physically and digitally on all platforms, complete with save states, original graphics and HD smoothing options, a global easy mode to soften up the platforming chaos, and a new Z Chaser challenge mode that could allow gamers to share high scores online.

This collection will be a major part of Capcom's rather thin FY2019 games slate. Capcom's only AAA project this fiscal year is the huge Monster Hunter World: Iceborne expansion. The rest should be smaller titles and re-releases like this new Mega Man one as Capcom ramps up its new projects for next-generation consoles.

Check below for a press release with more info:

Ready your Z-Saber and prepare to megamerge as old friends and new heroes from the Mega Man universe unite in Mega Man™ Zero/ZX Legacy Collection. All four Mega Man Zero games, Mega Man ZX, and Mega Man ZX Advent are being offered together for the first time on the Xbox One family of devices including Xbox One X, PlayStation®4 computer entertainment system, Nintendo Switch™ system, and Steam. The collection will be available at MSRP $29.99 on January 21, 2020 both digitally and at North American retail locations for consoles. PC players will be able to purchase the digital edition on Steam.

Mega Man Zero/ZX Legacy Collection brings the Zero and ZX series' challenging boss battles, fast-paced platforming, and precise combat from hand-held to full-sized screens for the first time. Nostalgic players can choose to play using the original sprite art, or they can bash some bots using the new optional HD-smoothing filters. New players looking to cut a path through the Zero and ZX series' stories can also use the optional Casual Scenario mode to reduce each game's difficulty, and Save-Assist system to create save points mid-mission for a more approachable narrative experience.

Players can also take a break from the action, and dive into the in-game gallery featuring over 600 pieces of original production art from each series, while listening to the music player's complete election of both original compositions and new arrangements. Fans of the series looking for a challenge will also be able to test their "Biometal" against the all new Z Chaser challenge mode. More details on Z Chaser mode will be revealed at a later time. 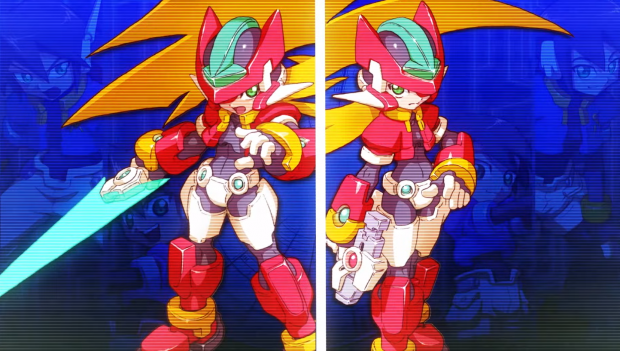