Nintendo's new Switch console continues gaining momentum, and digital sales, one of the company's most important metrics, are skyrocketing. 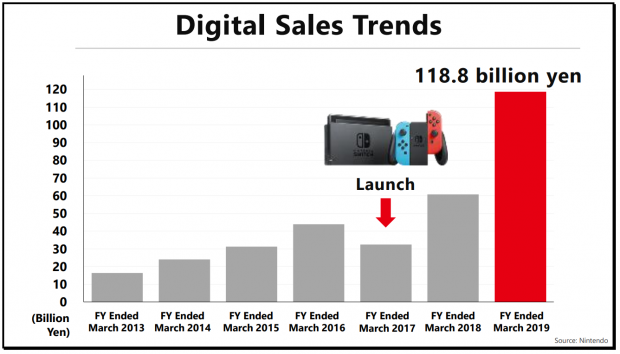 When it comes to gaming, hardware is just the beginning. The real money is made from games and services, which churns the $100 billion strong games market every year. Digital is a direct-to-consumer delivery method that reduces company costs, friction, and offers convenience, all while monetizing a core audience. Like its competitors, Nintendo has been quite successful in tapping this market and shows incredible growth throughout its last fiscal year. 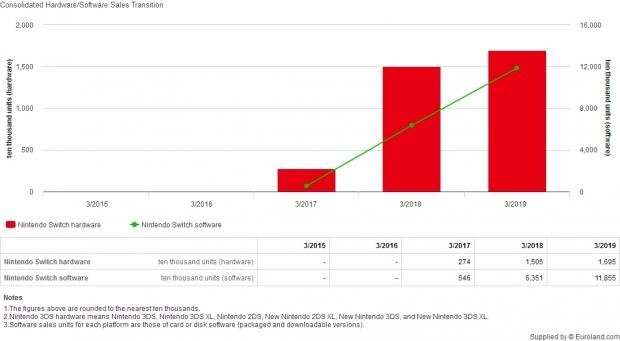 Mr. Furukawa notes that the eShop's massive expansion of games is responsible for this growth, and indies in particularly help supplement its marquee million-sellers like Super Smash Bros. Ultimate and Mario games.

The president also brought up an interesting point on attach rates. Digital is actually disrupting certain figures and the traditional tie-in ratios aren't as relevant any more: no longer can we simply divide software by hardware revenue to see how much Switch owners spend on games. Digital content is the outlier here and isn't calculated in this simple formula, and as Nintendo further embraces subscriptions, DLC, and add-on content like Super Smash Bros.' Fighter Pass, this discrepancy will widen.

Read more: How Switch stacks up against other Nintendo hardware

The games industry is becoming increasingly more digital-based every year, and the benefits are paying off big time. Platform-holders like Nintendo stand to gain the most from digital sales.

Not only does Nintendo make a cut from every game sold on the eShop, but it also pulls in cash from third-party add-ons, DLC, microtransactions, and subscriptions. Plus Nintendo keeps 100% of all revenues from Switch Online and its own first-party game sales. Digital also alleviates manufacturing costs of retail cartridges and game cases, saving companies millions every year.

This forward momentum should continue as publishers bring more games to the Switch, especially with re-releases that see older catalog games ported to the handheld-console hybrid. Historically, Switch owners have proven to have insatiable appetites for new content and Nintendo is all-too-eager to serve up games for consumers.