Google announced its new Stadia platform today, a cloud-based gaming platform that promises big things: delivering up to 4K 60FPS HDR gaming over devices that aren't even built for gaming, blasted over Chromecast.

The announcement saw id Software executive producer Marty Stratton talking about Google Stadia pumping out DOOM Eternal at 4K 60FPS with HDR support, all on a single AMD-powered Stadia GPU. DOOM Eternal will be playable on all Stadia-capable devices, which will include smartphones, tablets, TVs, desktops and laptops. It'll also work with Google's new Stadia game controller, too.

Stratton said it only took the developers at id Software a few weeks to get DOOM Eternal working on Stadia, which is impressive to hear. Stratton explained: "If you're going to prove to the world that you can stream games from the cloud, what better proof than Doom? [...] It didn't take us more than a few weeks to get Doom Eternal looking and playing great on Stadia. [...] We couldn't be happier to be bringing Doom Eternal to Stadia, and are thrilled to announce the game will be capable of running at true 4K resolution, with HDR, at an unrelenting 60fps". 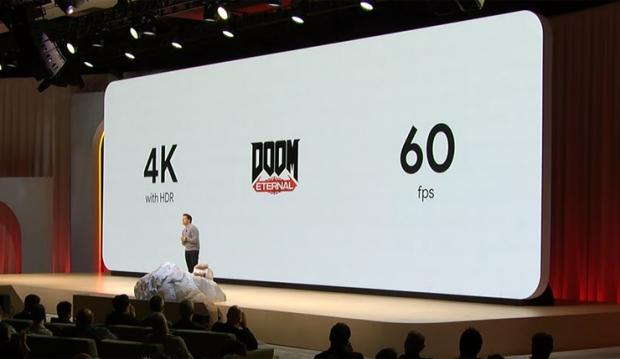