Stadia is Google's new streaming platform, but it's much more than just another service: it's a new evolution that brings an era of accessibility, convenience, and ease-of-use to gaming. Gone are the days of needing high-end consoles and PCs, Google says: using Google's powerful datacenter network, Stadia will stream high-fidelity gaming up to 4K 60FPS to devices like laptops, desktops, tablets, TVs via Chromecast, and mobile phones via cloud technology.

Google promises Stadia will give instant access to its games, all within Chrome or YouTube. Users can launch games directly from YouTube trailers, bringing a new native connectivity to gaming. Trailers on YouTube can have a play now button, which brings the player right into the game in as "quick as five seconds with no download," Google's Phil Harrison said.

"Our goal with Stadia is to reduce the friction of getting excited by a game and playing a game. On Stadia, you just need to click on a YouTube video or link and you can be playing your game instantly," Harrison said.

"The key benefit of our platform is that a single creative vision and a single code base can now be enjoyed instantly across any screen. At launch we'll support being able to play games across desktops, laptops, TVs via Chromecast, tablets, and phones. This new generation of gaming is not a box; the datacenter is your platform, there is no console that limits the creator's ideas, or limits where gamers can play."

Stadia is breaking down the barriers between hardware and devices, too.

Google confirms Stadia will have full cross-platform multiplayer and bring game saves and progression across all devices. This is a massive feat that will completely annihilate competition as long as Google can consistently deliver over time, and offer up big-name games. 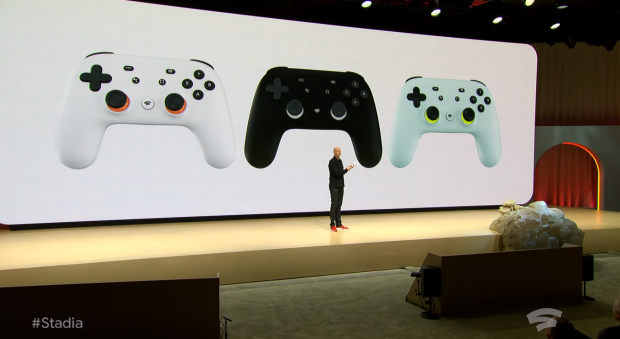 Speaking of hardware, there is no actual console. Google is transcending the limits of console gaming's walled-garden. But Stadia will have a specialized controller that connects to Wi-Fi and directly links up to servers for improved compatibility and integration. The Stadia controller has built-in sharing functionality for screenshots and quick state shares.

Stadia is a game-changer for gamers and could completely upend the current market...if Google can in fact deliver on its promises. The amount of networking power needed to constantly beam games to all these devices is staggering, not to mention latency issues that typically plague online-only experiences.

Each Stadia server blade is powered by a customized AMD GPU with 10.7 TFLOPs and an x86 processor with 16GB of RAM--both of which are specifically designed for the service. Thus armed with hardware, Google can tap its huge network to beam its games remotely across the globe.

Stadia is launching in 2019 across North America and Europe, but no pricing was revealed.