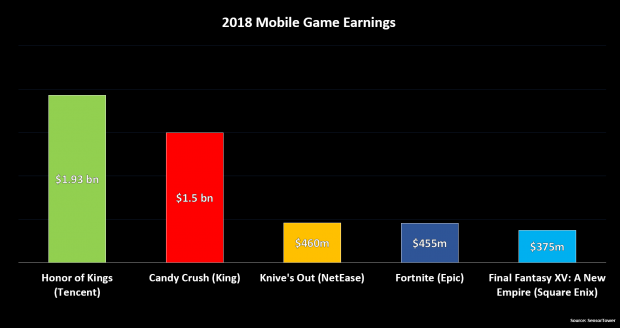 Honor of Kings made $1.93 billion in 2018, making it the highest-earning mobile game of the year, analyst firm SensorTower reports. To put this number into perspective, this one mobile game made nearly 20% of Tencent's total 2H revenues of $10.2 billion. The game (known as Arena of Valor outside of Asia) saw a substantial 19.87% rise over last year's earnings.

Strong monetization and adoption in Asia is responsible for this megaton success. Nearly 95% of spending was from iOS users in China, SensorTower says, and less than 1% came from the United States. It's no wonder that every big games-maker from EA to Activision-Blizzard want to bring their games to China.

Furthermore, findings from Newzoo indicate China pulled in $37.9 billion in 2018, or 27% of total games industry spend, whereas mobile gaming would make up more than half of total earnings with $70.3 billion.