CES 2019 - BioWare have released not only the minimum and recommended PC requirements for Anthem, but also have showcased the Storm Javelin through a gameplay trailer.

The Storm Javelin gameplay video has been released through the IGN YouTube channel and gives us a breakdown into what to expect from the Storm class. Players that decide to jump into the Storm javelin should note that the class resembles somewhat of a wizard, mage or glass cannon. Glass cannon means that the class features high damaging abilities, but suffers from a lack defensive capabilities. Due to the ability of flight, Storm Javelin players should note that even if the height advantage sounds full proof, this will also mean there is a lack of cover. Making for quite an easy to take out target.

BioWare has also released the system requirements for both minimum and recommended which coincides with NVIDIA's DLSS support that was announced for Anthem yesterday, check that story out here. Within the entirety of this post you will find a screenshot of both the minimum and recommended system requirements. If you desire visiting the website yourself, a link to that can be found here. 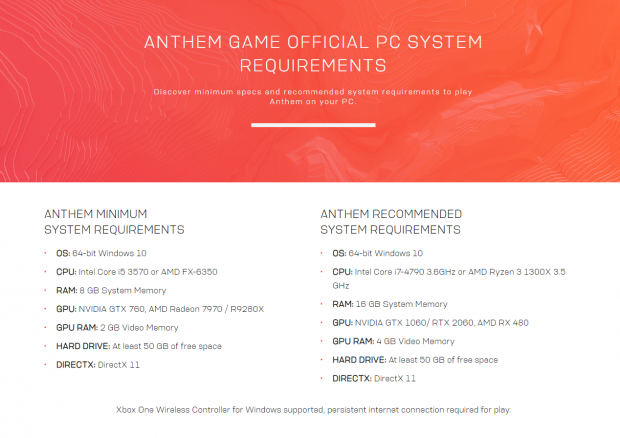