AMD has had a stellar 2018 and it looks like the planning for 2019 is going to reach the stars, with a new rumor that AMD is planning a huge AMD Tech Day during CES 2019 where it will unveil its next-gen HEDT platform: X499. 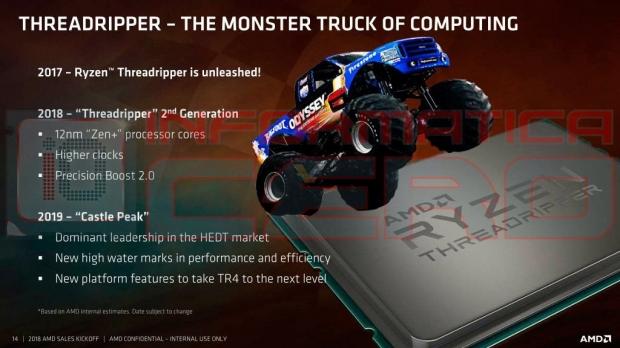 We heard rumblings about this a few months ago, with X499 arriving to battle Intel's new HEDT platform, X599 - which will support Skylake-X that will drive up to 28C/56T. AMD is already ahead of Intel there with their Ryzen Threadripper 2990WX and its huge 32C/64T, but the shift to X499 will see something that will leapfrog Intel... the move to 7nm.

AMD will be shipping 7nm processors and a new Radeon Instinct graphics card on 7nm later this year, so we should expect the company to be confident with 7nm in early-2019. We might see an announcement of things 'coming soon' in terms of X499 and the new 7nm EPYC processors, while we might see a tease of things to come from a third-gen Threadripper 3000 series.

The next-gen Ryzen Threadripper 3000 series is internally known as "Castle Peak" and will see AMD push their foot harder down onto Intel's neck, where we might even see PCIe 4.0 support, as well as a drive up to a huge 64C/128T with next-gen EPYC processors on the exciting new 7nm node.