NVIDIA has allowed the tech press to post at least one thing about their upcoming GeForce RTX 2080, and while we are all under embargo for all of the information until a later date, the company did allow us to reveal one thing. 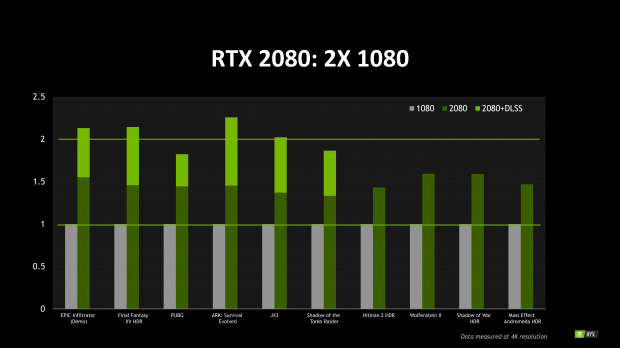 Turing is an absolute beast and all of the skepticism of the RTX 20 series since its reveal earlier this week during the GeForce Gaming Celebration, the company hasn't been clear on just how fast the new RTX 2080 and RTX 2080 Ti are.

Well, now we can reveal to you that the next-gen GeForce RTX 2080 is up to 2x the performance of the GeForce GTX 1080 at 4K in a multitude of games. We don't know the exact settings that NVIDIA used in this benchmark data, so we need to test it for ourselves to ensure that we are looking at one of the largest generational leaps in graphics cards ever... but after sitting through a day of briefings, I think we're safe to say that we should begin to get excited.

We don't have the benchmark data for the RTX 2080 Ti, that's something that I'm itching to see, as well as the NVLink results. We know everything there is to know so far, including the details on NVLink and other technologies, and I can't wait to go deep into testing Turing in the coming months.

For now, let us know what you think in the comments below.