Comic-Con 2018 - Matt Groening, the creator behind the longest running T.V show ever The Simpsons, has released a brand new Netflix trailer for his upcoming new series Disenchantment.

Groening has decided to leave his comfortable family life he created in The Simpsons and turn it on it's head, now taking viewers back to medieval times where they will be following a princess called Bean. Bean is the princess of Dreamland and the trailer begins with her almost marrying her prince, just before she is about to seal the deal she almost kills him, which then results in her running away to discover herself before she makes the decision to settle down.

Bean runs away with two companions, one being called Elfo who is her own personal Elf and also Luci, her own personal demon. On their travels to find out who Bean really is, Bean and her companions run into several other animals and mythical creatures, harpies, ogres, sprites just to name a few. Groening has stepped into a short 10-episode series packed full of adult comedy, the actors that are starring in the upcoming show are: Abbi Jacobson as Bean, Nat Faxon as Elfo, and Eric Andre as Luci. Disenchanted will be released on Netflix on August 17th. 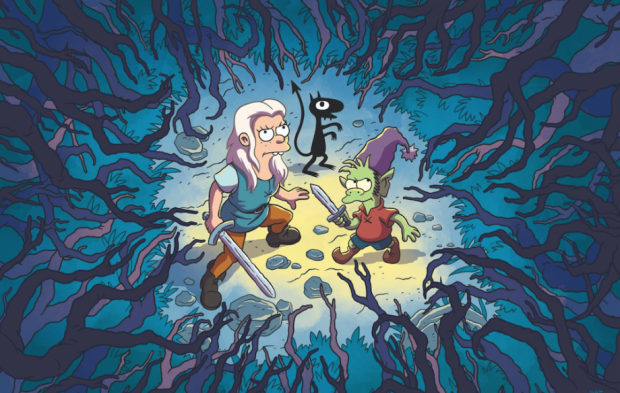