There must be some serious mind control devices over at EA, with the publisher reintroducing microtransactions in Star Wars Battlefront II, because why the hell not.

Star Wars Battlefront II will receive a new update next week that will see Crystals return, the in-game currency that you can buy with real-world money. The upcoming Night on Endor update will include Crystals, with developer DICE introducing some big changes to microtransactions so that they can only adjust your in-game appearance, because that makes it so much better.

The developer removed microtransactions from the company after the force strike of backlash they received not so long ago. One of the more positive parts of the Battlefront II update is that you'll be able to play as Ewoks in the new limited-time Ewok Hunt game mod that throws you into a team of Ewoks against Stormtroopers in asymmetric mode.

Ewoks will have to kill all Stormtroopers, while the Stormtroopers try to survive the attack before they're evacuated. For each Stormtrooper that is killed, a new Ewok will spawn.

The new Star Wars Battlefront II update drops on April 18 for PC, Xbox One, and PS4. 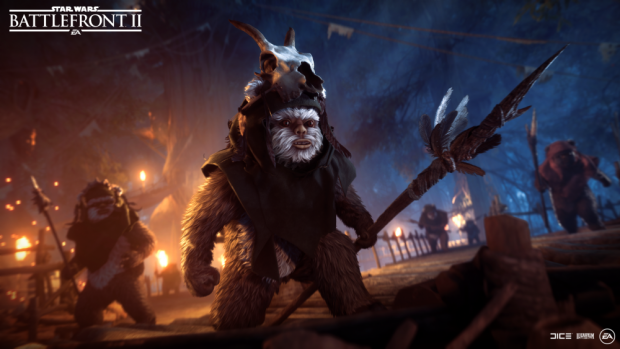