Warhammer: Vermintide 2 released on the 8th of March and to add to its launch, Fatshark have decided to release their roadmap for the upcoming three months. 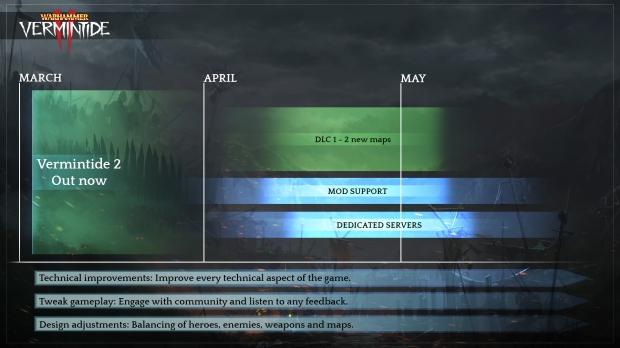 So far the new title has been quite successful, pulling in a 83% rating from user reviews. Steamspy records a massive 343K owners already and to support those players the above roadmap was released by Fatshark.

From the roadmap we can see that there is quite a lot planned for the newly released title. The first three months will be dedicated to bringing new maps, mod support and dedicated servers.

Here is what Fatshark had to say on their post: "While our primary focus for the months to come will be to listen to the community and ensure the best possible experience of Vermintide 2, we also have a general plan set up for the post-release period. We are proud to share our plan for the next three months. It details the rollout of new updates and content from the release until the end of May."