Nintendo's partnership with DeNA is becoming quite fruitful as smartphone games like Fire Emblem Heroes rakes in serious cash. 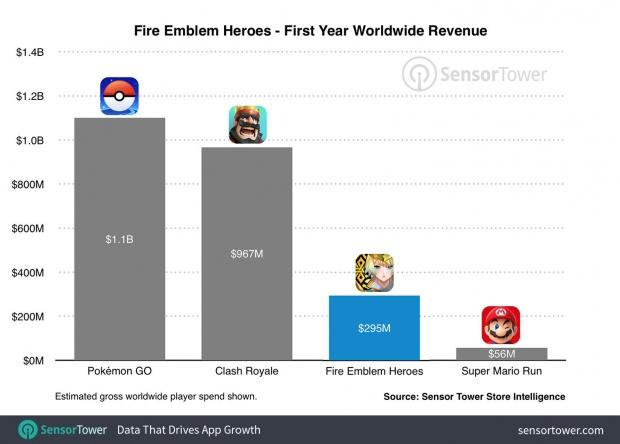 While it's not up there with Pokemon GO and Clash of Clans, Fire Emblem Heroes has made nearly $300 million in its first year earnings. According to data compiled by analyst firm SensorTower, the Fire Emblem mobile game has pulled in about $295 million in its first twelve-month period, dwarfing Super Mario Run and the more recent release of Animal Crossing.

Japan is the most interested in the game--not surprisingly since the Gacha business model is in full effect in the game--with the lion's share, or 59%, of earnings coming from the country. The U.S. made up about 29% of earnings, and other countries just sitting at about 12%.

"To illustrate the challenge Nintendo faces, during its first two months of availability after launching worldwide on November 21, 2017, Nintendo's mobile Animal Crossing had grossed approximately $20 million across the App Store and Google Play, less than one quarter of the $86 million players spent in Fire Emblem Heroes during its first two months," SensorTower wrote on the announcement post.

"Last month, Fire Emblem Heroes ranked No. 34 for worldwide mobile game revenue on both platforms, while Animal Crossing ranked No. 190, further putting the two titles' degrees of success in contrast."

It's highly likely that Nintendo will continue using this popular monetization model in its future smartphone games in a bid to capture the market and pull in maximum revenue. 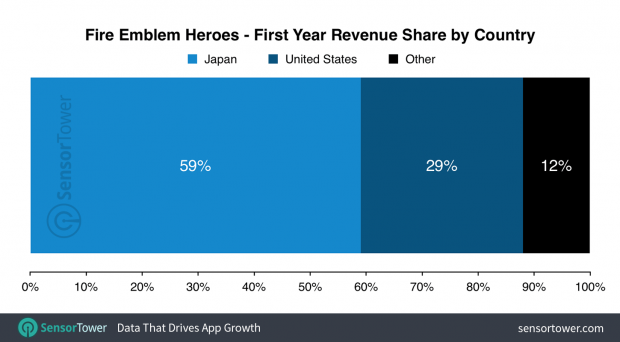