A nifty gadget from Swedish company Neonode lets you turn your laptop screen into a touchscreen simply by plugging in a small Wii sensor bar-like device via USB and...that's it.

Once plugged in, the AirBar takes care of the rest by projecting an invisible field of light onto the surface of your display, magitechnologically allowing you to interact directly with it. I kid: the bar utilizes zForce AIR tech, which uses sensors to relay information as a form of movement to the laptop when the light beams are disrupted.

As a bonus, the touch functionality is perhaps less sensitive than your typical touch displays in that you can touch with oven mitts, chopsticks, fingers, or whatever else. Even a paintbrush can be used, effectively turning your laptop into a poor man's graphics tablet.

And as for battery drain concerns, Neonode claims the AirBar does no such thing. 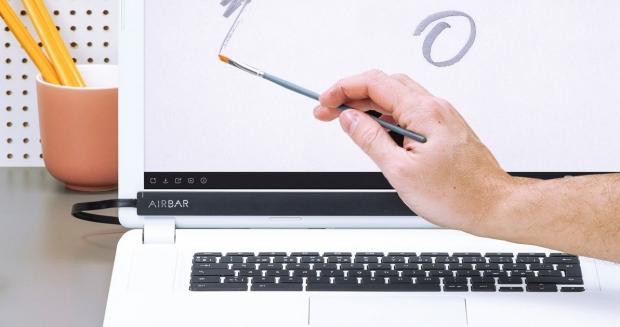 Unfortunately for Macbook users, it's PC only, although they do say it has limited functionality on Apple's platform.

The AirBar can be pre-ordered now for $69.