Computex 2016 - ASUS has revealed a new G-Sync ready ROG Swift monitor that can be overclocked to an insane 180Hz. 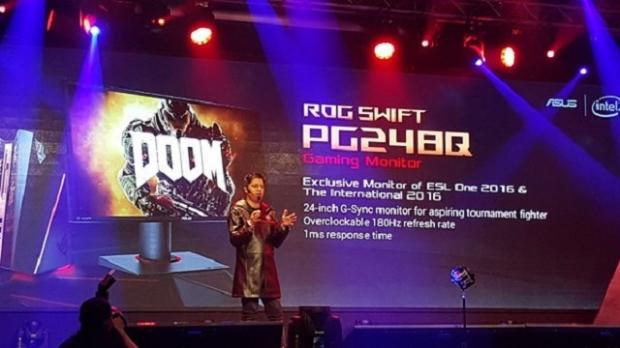 ASUS has redefined the refresh rate threshold with its new 24-inch 1080p ROG Swift PG248Q TN display with NVIDIA G-Sync that's capable of hitting up to an incredible 180Hz. The new ROG Swift PG248Q not only packs in G-Sync for tear-free gaming and overclocks to 180Hz, but it also sports an amazing 1ms response time, offering up some of the smoothest and responsive 1080p gaming around.

ASUS affirms the PG248Q is designed specifically for pro eSports gamers as well as enthusiast gamers, serving up "unparalleled performance and innovation" in a smaller form factor that's designed to reduce the amount of time "your eyes roll across the screen". The ROG Swift PG248Q will be the exclusive monitor for major eSports events including ESL One 2016 and The International 2016. No pricing or availability details were announced just yet.