From Software's next game will apparently release on Sony's PlayStation VR headset.

We've known for a while that From Software, the diabolical devs that brought us the hellish Dark Souls trilogy, is breaking away from the Souls franchise. Hidetaka Miyazaki even went so far as to say that "it wouldn't be right to continue the Souls series." Although we don't know what From Software's new project actually is, we do know it'll have a port on Sony's PlayStation VR.

The news was gleaned via a recent video on the studio's YouTube channel that chronicles a timeline of From Software releases. The video ends by hinting From Software's newest game could drop in 2017, and it'll release on the full spectrum of platforms: Xbox One, PlayStation 4, PC, and the PlayStation VR.

Miyazaki has dropped a few hints on what the new game might be.

"As president of From Software, I am planning to launch several new projects. I can't quite specify exactly what they are. Those could be something sci-fi, but you'll have to stay tuned for more about that in the future," Miyazaki said in a past interview. "I believe that From Software has to create new things. There will be new types of games coming from us."

We could see From Software announce its latest game at E3 2016, especially since the new project might come out in 2017. 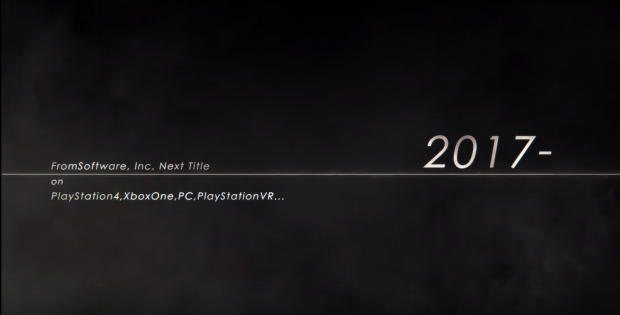