What would you do if you had the chance to play around in a bus in a fully destructible world that had funky physics and obstacles that bounce you around like a cat on a trampoline?

Yeah, that's Omnibus, and it's a strangely built homage to all the wonderful things the mighty bus has done for us humans, letting us take up the mantle of the magnificent charabanc that's been the archetype of good in times of bad. But really, it takes some crazy physics modeling and lets you barrel through a number of levels with PS One level graphics (made with the Unity 5 engine) completing challenges, or just trying to destroy anything that rises up above the level of the road.

You get the chance to choose which type of bus you want and simply enter either the story mode, which is filled with an actual honest to goodness real story, though you'd be excused if you didn't quite get the whimsical humor that they're trying to portray. But there's real character development going on, and it's great. More than that, it's actually entertaining! 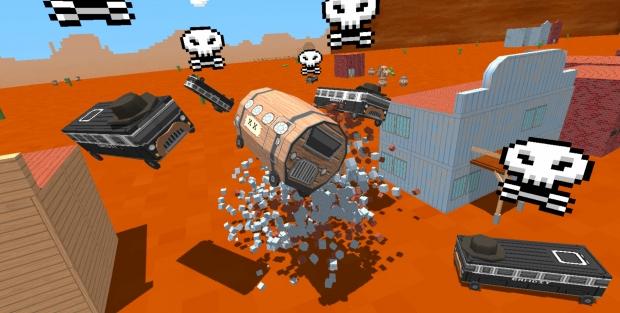 And no, it's also not a serious game by any means. Everything about it screams "LET'S PLAY GAMES!" In the silliest of manners. You're a bus in a game that looks like it could have actually been released originally on the PlayStation One with the worst physics modeling you'll ever experience. It can get frustrating when being bounced around in any number of different ways that seem to defy exactly what you think should be happening. Wait a minute, Shouldn't I be going towards the ground at some point? Yeah, maybe in any other game out there, but not this. You'll fly off the handle until you reset it. And you can do that as many times as you like until you get it just perfect. The levels you go through are all about running through, into, over and around things to meet your goal. And they're short and sweet, with challenges that won't have you punching your monitor, too hard at least.

It's simple, though, and that simplicity just might not be attractive to everyone. And it's up to you to figure out if you feel that the occasional mindless(ish) game with deep guffaw-inducing laughter is for you. This is the kind game that requires very little thought, but can provide a kind of pleasure that's surprising. It's good to take your mind off of whatever troubles you, but won't the kind of engaging experience you want from a deeper game, it just isn't that. It's casual, it's silly, and it can be fun to a certain type of person (or maybe anyone). So it might not actually be the best game coming out this year, but it's close to one of the most fun, regardless of how it looks on the outside.