CES 2016 - NVIDIA has jumped on the VR bandwagon in a much stronger way, announcing its new GeForce GTX VR program, with its aim of getting PCs, notebooks and GPUs ready for VR. 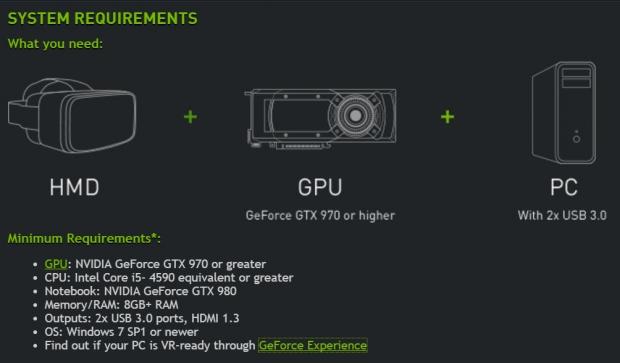 NVIDIA has a list of add-in cards (AICs) and system builder partners that are good to go when it comes to VR. NVIDIA designates its GeForce GTX 970, GTX 980, GTX 980 Ti and Titan X as GPUs ready for VR gaming, with NVIDIA's partners meeting the company's standards able to display a "GeForce GTX VR Ready" badge on their systems and video cards.

The company is aiming at the combination of GeForce GTX GPUs, NVIDIA Game Ready drivers, GameWorks VR and DesignWorks VR technologies - alongside the new GeForce GTX VR ready program, that it will provide gamers with the best solution for VR gaming.