Apple has just launched its new premium 12.9-inch iPad Pro out into the wild, and the Apple forums are already bustling with user complaints and performance issues.

According to a sizable forum post, many users have noticed that the $799 iPad Pro freezes up and becomes totally unusable while it's charging. Although users can hard reset the device to restore functionality, just about everyone is pretty upset about a huge oversight affecting such an expensive tablet. After all, Apple seriously touted the iPad Pro by saying the tablet is capable of "PC-grade performance", among other surprising claims.

Apple has yet to issue an official statement on the problem, and there doesn't appear to be an actual fix just yet. Users who contacted Apple Support were advised to send the device in for repairs or exchange it for a new device, however one iPad Pro owner says the same thing happened to their new device. Whether or not the glitch is a hardware or firmware fault remains undetermined.

Considering Apple charges up to $1079 for the 128GB LTE iPad Pro, this kind of thing is unacceptable. New hardware launches are accompanied by the unavoidable bugs and hitches, but iPad Pro's freezing problem is as basic as it gets. The company will likely step in and address the situation as long as it continues to gain momentum, and judging by the ever-growing responses from disgruntled buyers, it should be sometime soon. 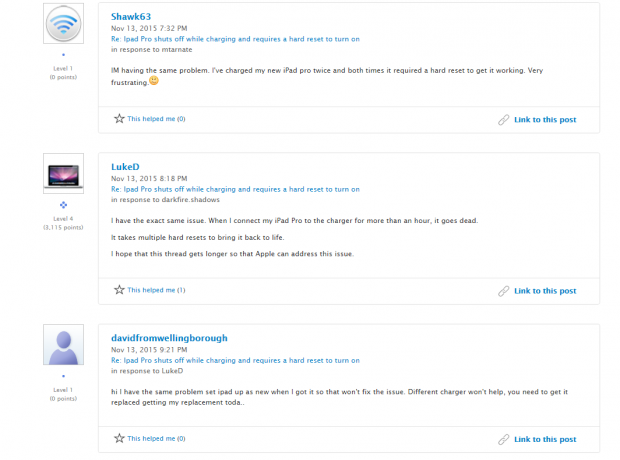