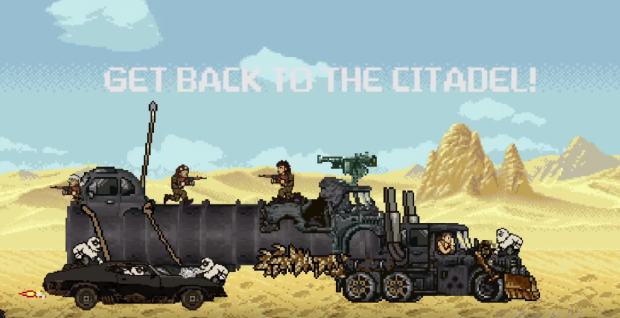 If you've ever wondered what Fury Road would look like rendered as an old-school NES game, CineFlix has you covered. The 8-bit Cinema presentation has gamified a number of popular Hollywood blockbusters into "80's arcade and NES inspired action", and is certainly a must-see for all Code Monkeys fans out there.

The video condenses Miller's magnum opus into three minutes of bit-style magic, and if you haven't seen the film you might want to steer clear as there are spoilers intact. The video showcases the memorable events of the post-apocalyptic flick, including the guitar flamethrower, the desert storm sequence, and the high-speed chases rendered into Contra-style firefights.

If you have an idea for what movie should be next, be sure to leave a comment on the channel. The most popular choice so far is an 8-bit rendition of Back to the Future, and really that's a no-brainer. Maybe they could do Back to the Future Part II and release it on October 21, 2015 to coincide with the launch of Pepsi Perfect?