Every month Valve conducts in-depth surveys to determine the most popular hardware and software solutions used by Steam gamers and compares them on a month-by-month basis. Last month's survey report reveals that most gamers are using stock hardware rather than high-performance rigs. 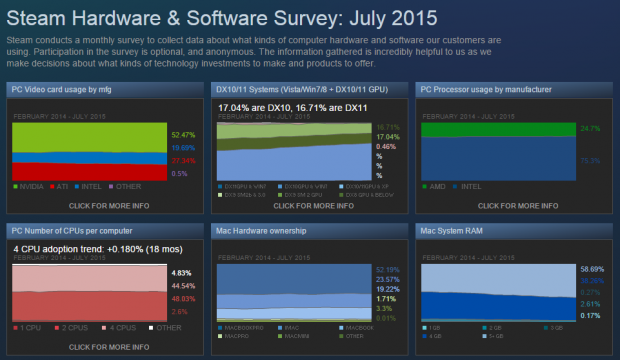 When it comes to CPU's ~48% of Steam users run dual-core CPU's, with quad-core CPU's close behind at ~45%. The bulk of CPU clock speeds are between 2.3 GHz and 2.6Ghz, but the 3.3-3.69Ghz clock bracket is on the rise accounting for approximately ~16% of users. Intel CPU's predictably dominate with an inclusion rate of 75% versus AMD APU's at just a quarter of users.

Valve notes that most Steam gamers prefer NVIDIA cards over AMD, and DirectX 11 GPU's conquer the lesser DX10-supported cards. Other parameters prove to be pretty basic, with common specs like Windows 7 64-Bit, 8GB of RAM and 250-500 HDD's. Check below for a quick breakdown of Steam user hardware specs for July 2015.