343 Industries has revealed new info on the importance of teamwork in Halo 5: Guardians' campaign mode, underlining key mechanics and tweaks they've made along the way. 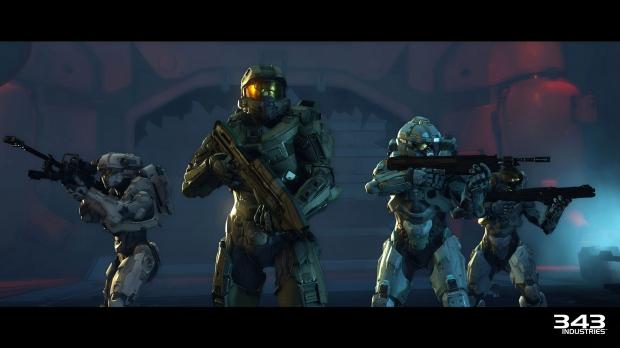 For the most part 343i has kept the standard Halo formula in tact for Halo 5, but this time around the game has a decidedly more strategic co-operative feel. Gone are the days of lone-wolfing it in Master Chief's boots: throughout the missions you'll be accompanied by three other Spartans all with their own attributes, Loadouts, and specialized HUD's.

"Your team is your weapon," reads the developers' new Halo Waypoint update.

Just like Halo 2 the newest chapter is split between multiple perspectives. First there's Blue Team, led by John-117, which features classic Spartan III's like the sharpshooter Linda and the ultra-fast Kelly. A new conscript by the name of Tanaka joins the ranks as well, and is aided with increased motion sensors.

Osiris Team (pictured below),led by ONI's Agent Locke, is a team of sleuthing Spartan IV's charged with finding Master Chief and the rest of Blue Team when they mysteriously go AWOL. Osiris Team also has a unique "Tracking" ability that

"Throughout the course of the campaign the action will shift between Fireteam Osiris (Locke) and Blue Team (Master Chief). The Chief's missions represent vital turning points within the story and pose questions the player will answer while playing as Locke and Osiris. Only by playing back and forth between the two teams will the complete story be told." 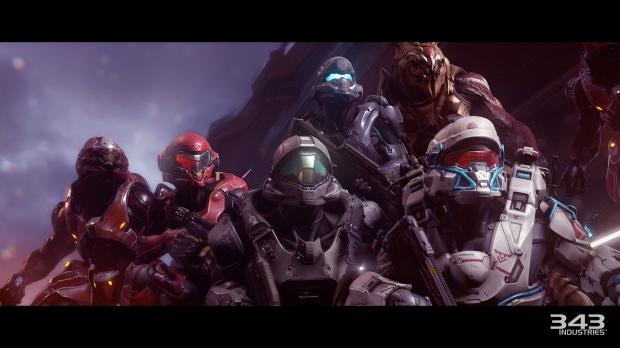 The teams have four Spartans apiece totaling up to eight playable characters, each having specific weapon loadouts, abilities, and specialized heads-up displays. Even if you play alone, AI-controlled Spartans will compliment you during the campaign. 343i affirms that four Spartans will be active at any given time, and other online players can join your session with seamless drop-in/drop-out co-op play. 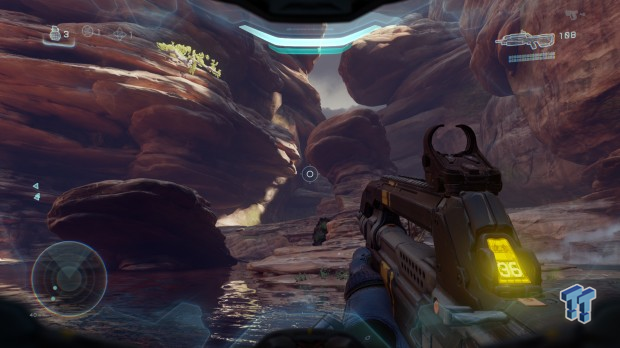 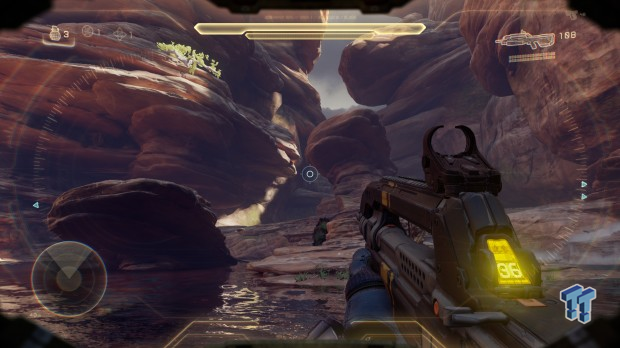 "Each character's HUD has been painstakingly designed by our artists to reflect the visual language of that particular Spartan," the devs iterate on the stylistic choices. For example, Locke's HUD (pictured left) has a more angular and sleek design to represent his persona and role, whereas Linda's HUD (pictured right) is more streamlined for her designation as the team's sniper expert.

As for examples of the character-specific weapon loadouts, Linda will launch with her trademark Sniper Rifle whereas Master Chief totes his trusty Assault Rifle and Magnum combo. There are also "subtle differences" between the characters that match Halo's canon. Kelly has a noticable speed boost during the campaign, and we can expect small variations among the fireteams to keep things interesting. 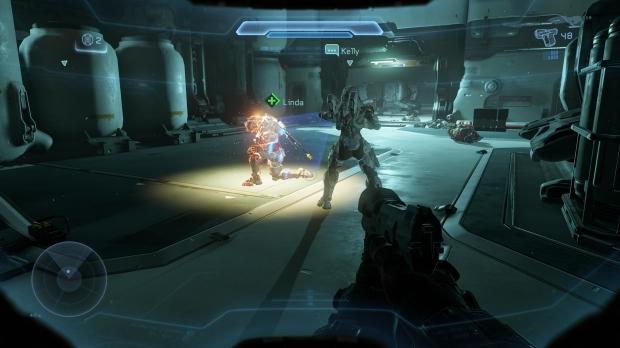 Halo 5 also has a unique new orders-based system that affords new strategic command. If you happen to be playing as either fireteam's leader, Master Chief or Locke, you can issue commands to your team like "revive player" or "pick up weapon" by pressing Up on the D-Pad. AI-controller teammates will follow commands on a whim, bringing a new tactical sense to gameplay.

A new Revive mechanic will make its appearance in the campaign as well. When a Spartan's shield bar and health are depleted they'll go into a "downed" state rather than dying, giving other teammates the chance to revive them.

"If you die before you can be revived, you will respawn once a player-controlled member of your team makes it to a safe location, free from combat. If every player-controlled member of your team is killed in action, you will wipe back to the previous checkpoint. This adds a layer of risk/reward to the traditional checkpoint system used in prior Halo games, and in co-op, encourages better teamwork and sportsmanship."

To keep things balanced out 343i has given all the game's enemies a hefty boost. Baddies are not only faster and stronger, they have new complex adapting behaviors that are specifically designed to deal with whole teams of players. The environments can feature dozens and dozens of foes, giving a real epic feel to every mission.

"The scale of campaign experience that we are delivering with Halo 5: Guardians is far beyond any previous Halo game. With co-operative play as a focus, it has meant creating larger spaces with multiple vertical levels and intersecting pathways. Teammates are encouraged to spread out and explore, seeking advantageous positions from which to support one another."

Sadly Halo 5 will not feature split-screen, and you'll be limited to online play for drop-in/drop-out co-op and multiplayer. Halo 5: Guardians is slated to release on October 27, 2015 exclusively for the Xbox One.