According to the latest rumors from various sources, Rockstar is working on Grand Theft Auto: San Andreas 2. The sequel to the popular GTA: San Andreas will be dropping on the PS4 and Xbox One sometime in 2015. 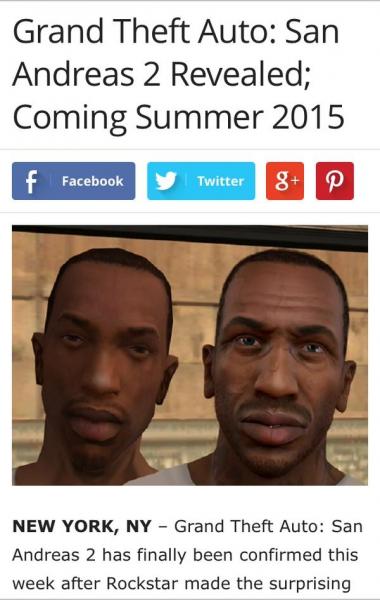 Rockstar reportedly "confirmed" that it was working on Grand Theft Auto: San Andreas 2 at the PlayStation Experience event recently. According to the rumors, Grand Theft Auto: San Andreas 2 will take place in 1999, some seven years after the events in the original game. CJ will return as the protagonist, which will be voiced by Young Maylay once again.

Many have claimed the news is fake, which is why we're putting a very big 'rumor' stamp on this one. With the news of Online Heists coming to GTA V next year, and GTA V reaching the #pcmasterrace on January 27, 2015, the world of Grand Theft Auto seems to be truly opening up for 2015.