According to Jon Peddie Research and Fool.com, NVIDIA is now pulling away from AMD in total market share - further claiming that "there's no question that NVIDIA has gotten the better of AMD" over the past four years of production. 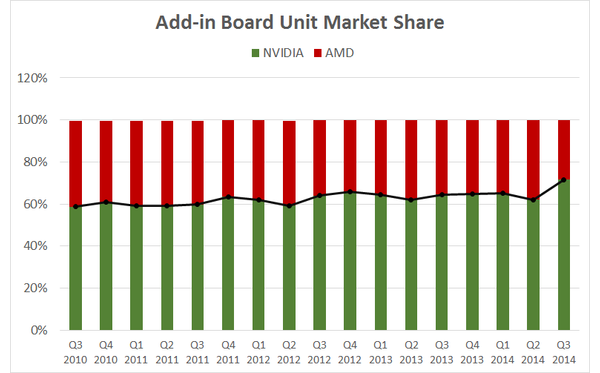 NVIDIA have gathered 70 percent of the recent Add-in Board (AiB) market share, marking themselves above their average cruising rate of 60 percent as seen through the graph above. In a bid to get back to 50/50 and retaliation to NVIDIA's powerhouse GeForce GTX 970 and 980 cards, AMD have started cutting the retail pricing of their latest models starting around October 2014. However, with new 9 series cards rumored for release by NVIDIA - we're interested to see how the Q4 results will report.

There have been rumors of new AMD video cards on the horizon, however they certainly won't be ready before the end of 2014. Does this mean that AMD are currently 'on the rocks' with a poor-looking 2014? The Fool article released a strong statement, claiming that "the only thing keeping AMD afloat today, besides the hope that the future will be brighter, is its deal to supply the game consoles with SoCs" adding that "all AMD has is hype, and that's just not enough".

Are AMD really in a dire situation as reported by these other news outlets, or do you see the new releases being somewhat of a 'saving grace' for the company?