NVIDIA has just posted its Q3 fiscal year 2015 results, which ended on October 26, with some impressive results. The chipmaker has posted a Q3 revenue of $1.23 billion, which is up 16% year-over-year, while revenues are at $3.43 billion, up 15% year-over-year. 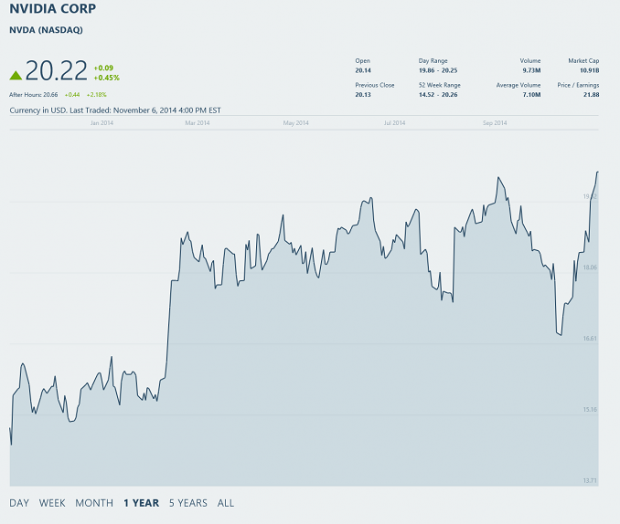 The company launched their second-generation Maxwell GPUs in the quarter, with the GeForce GTX 900 series performing, and selling well. NVIDIA's GeForce division also did well, which shouldn't be surprising, with their GPUs being the biggest revenue generator for the company. GPU sales were up 13% year-over-year, and quarter-over-quarter, with GeForce-branded GPU revenue up 36%. Gaming notebook sales are also up, more than double what they were last year. Tesla GPUs and GRID sales were also high, but no exact numbers were released.

NVIDIA's Tegra processor sold well over the three-month period, with a 51% increase year-over-year, with Tegra in vehicles being big business for NVIDIA. The company noted that over six million vehicles on the road right now have Tegra-powered infotainment systems. When it comes to mobiles, NVIDIA had quite a few products on the market with their chips: Shield, Google's Nexus 9 and some Chromebooks are powered by the company's Tegra K1 chip.