ASRock has unveiled its new X99-based motherboards, with one of the top-end boards being the new X99 Extreme 11 motherboard which features an insane 18 SATA ports. 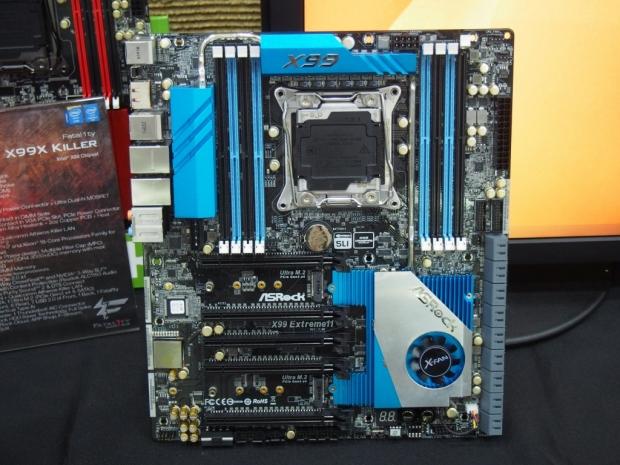 The ASRock X99 Extreme 11 motherboard is built on the same Super Alloy design that has been deployed on the rest of ASRock's X99 motherboards, with the PCB being built on a high-quality design and components, with the XXL aluminum alloy heat sinks being placed across the board. In order to cool down the extra storage and PCI-e controllers near the PCH, ASRock has provided an active fan cooling solution, bringing back memories of yesteryear.

Up to 128GB of DDR4 memory can be installed onto the X99 Extreme 11, at up to 3300MHz for the overclockers out there. Power requirements sit at the usual 8-pin EPS and 24-pin ATX connectors, but let's get to the 18 SATA ports. 10 of the SATA ports are powered through the PCH, while the remaining 8 are powered through a separate SAS controller, but each and every SATA port is of the SATA 6Gbps variety. We also have two USB 3.0 and two USB 2.0 headers at the bottom of the board, too.

What's a new X99 motherboard without expansion slots? Where we have enough spacing and slots to provide four-way GPU support, with five PCI-e x16 slots on the board in total. Storage fans should already be happy enough with 18 SATA ports, but ASRock has also deployed two Ultra M.2 slots which support NGFF SSDs for even more storage.