PDXLAN 24 - TweakTown is on the ground in Portland, OR, for PDXLAN, one of the largest LAN parties on the west coast. A little background: PDXLAN started back when CRTs were still in vogue and the whole LAN was run off of a 1.5 DSL connection. Since then, the LAN has grown in size, and they have added more and more events throughout the year. PDXLAN 24 is currently taking place and runs from 6pm on July 11 to 6pm on July 14. We've been taking video during the event, but my MacBook Air isn't the most capable video editing machine, so video will be coming later this weekend.

We're going to take you through the start of the event until around midnight using pictures as pictures are worth a thousand words. So, with that introduction out of the way, let's get on to the fun stuff. 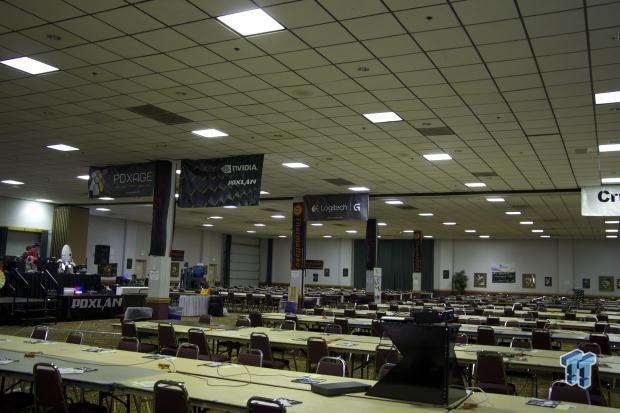 The LAN takes place in the Holiday Inn convention center next to Portland's airport (PDX), hence the name PDXLAN. As you can see, the LAN has yet to open to the general public, but setup has already been completed. Shortly, this cavernous room will be filled with heat-producing PCs and gamers hungry to frag and win prizes. 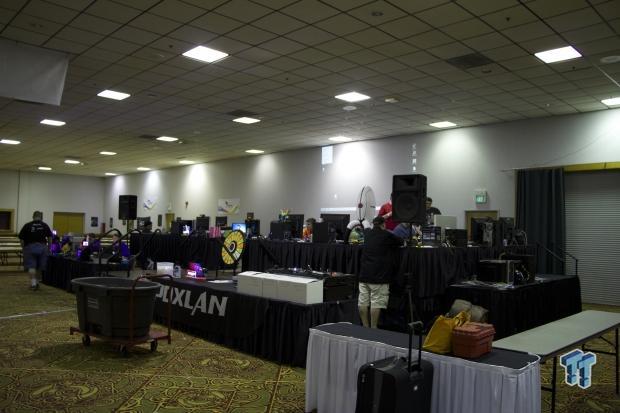 No LAN is possible without a dedicated team of admins. This area hosts the stage, help desk, and various admins that help the event to move smoothly. 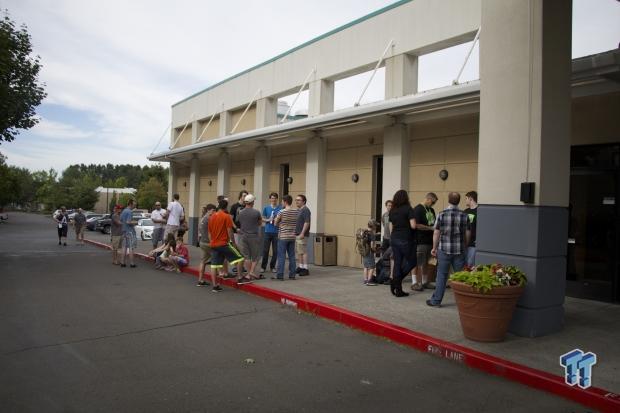 We're still 30 minutes away from doors opening, but that hasn't stopped people from lining up in the 85F+ heat outside the convention center. 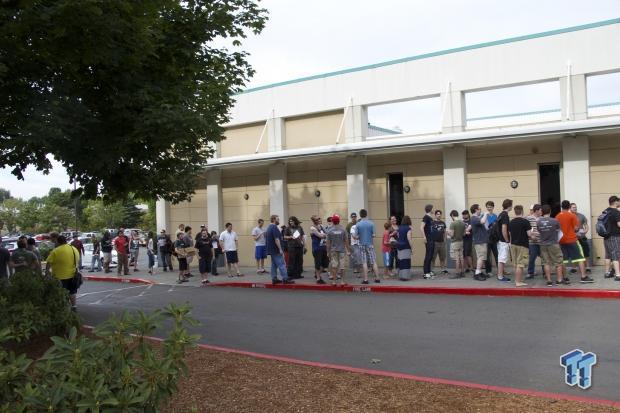 With just a couple of minutes to go, the line has grown, and people are carrying their PCs in all sorts of manners. 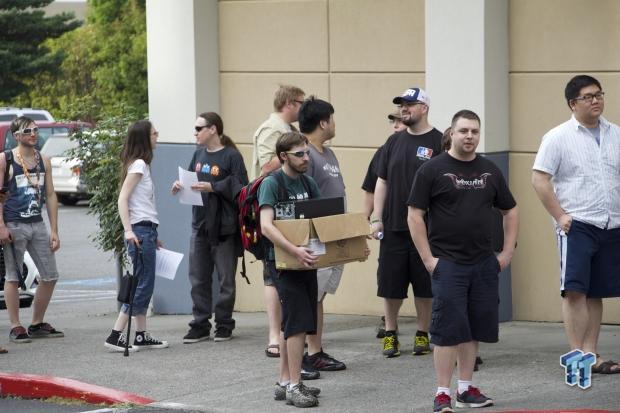 For instance, this gent has his PC in a box. 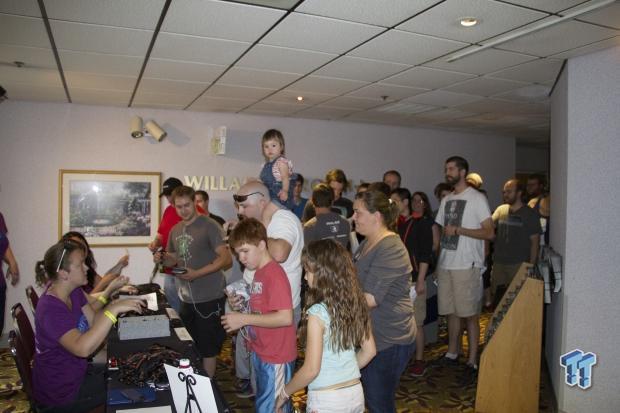 It's a mad rush to the registration booth, but everyone has a specific seat assigned, so the only reason for the rush is to get to fragging quicker. 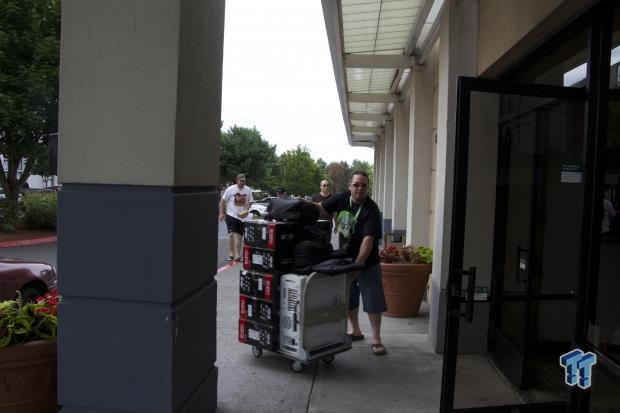 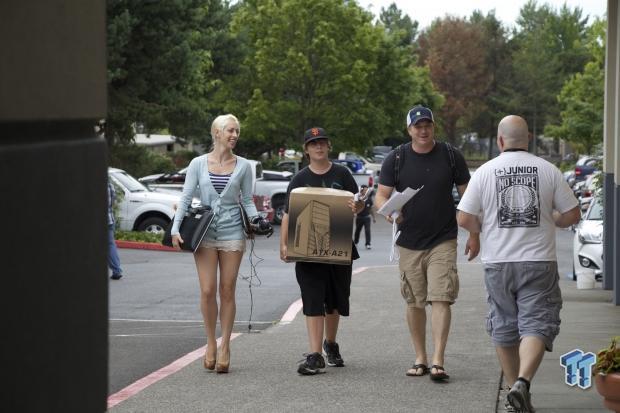 People of all types transport their gear in using whatever means they have available. 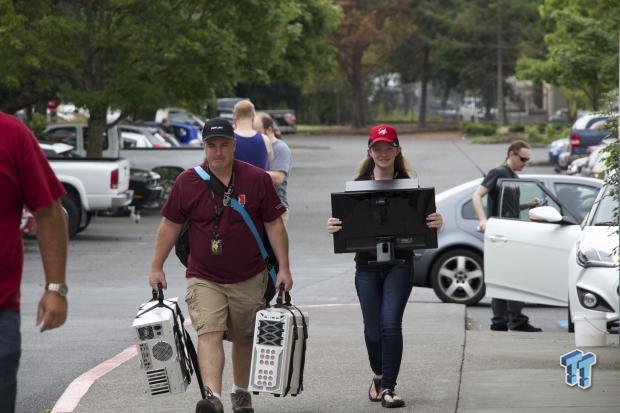 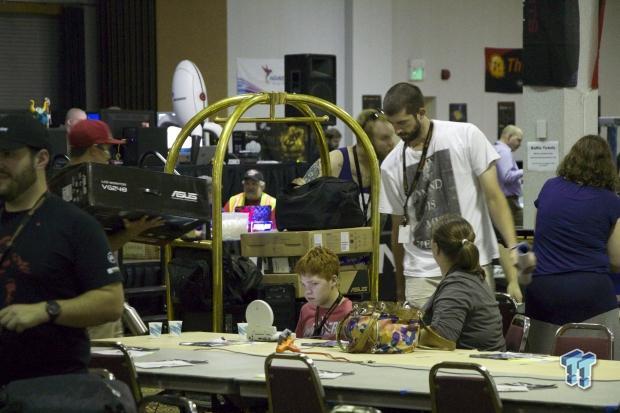 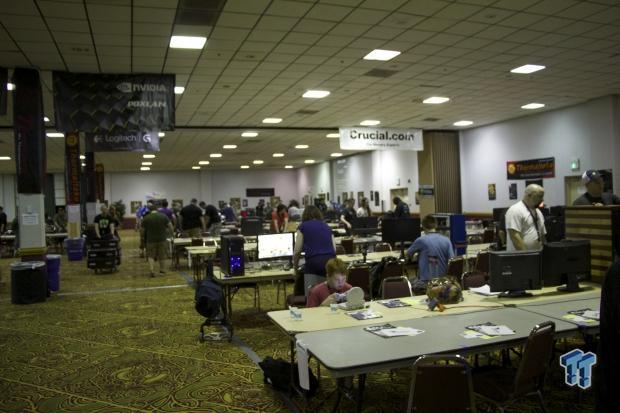 People get to setting up as quickly as possible so they can start gaming. 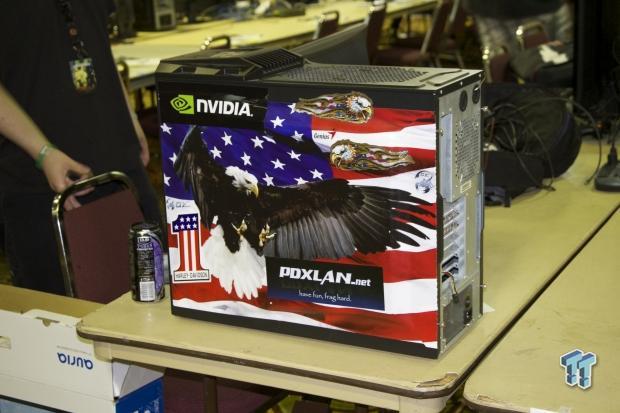 PDXLAN is known for its case mod competition. How about some 'MERICA? 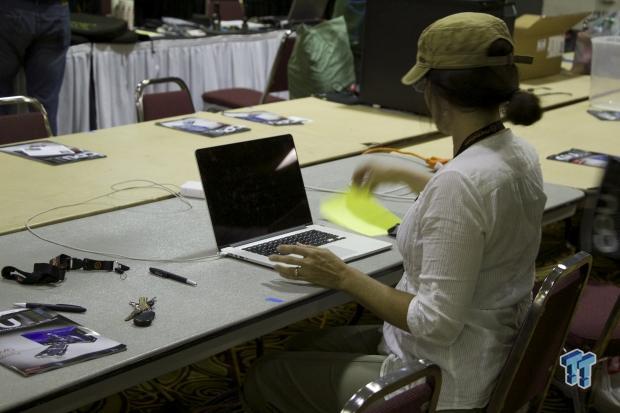 Not all gamers are created equal. 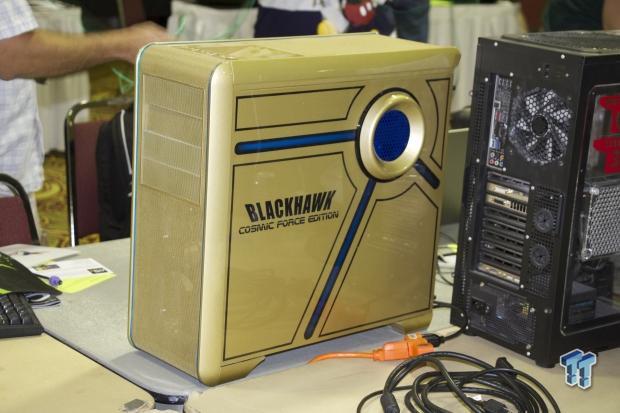 Another cool case mod. There's one that has yet to come that I've been seeing teasers of on Facebook. When will it make its arrival? 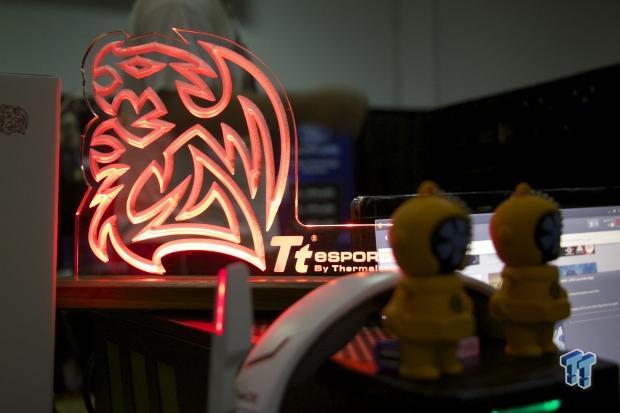 Thermaltake is in attendance as they are one of the sponsors of the LAN. Of course, TT dude came along for the trip. 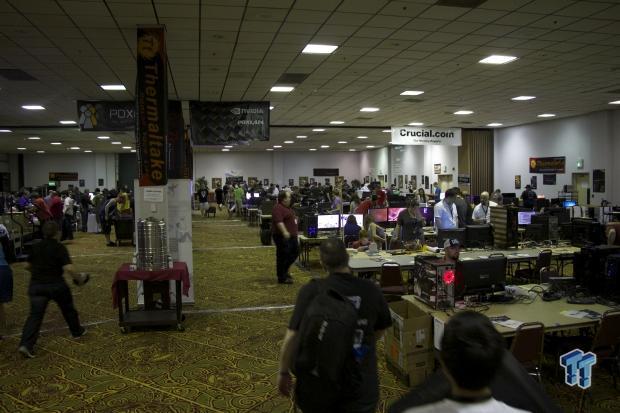 Things are starting to fill up now that we are an hour after opening. 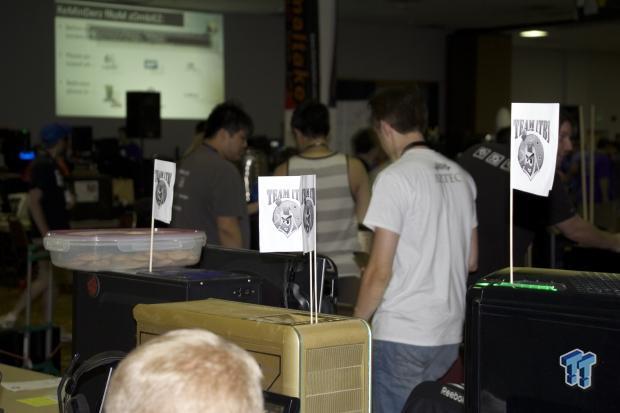 Team TB is showing pride with these homemade flags. 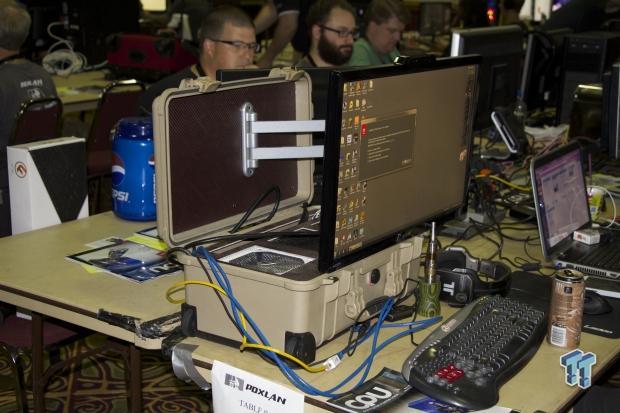 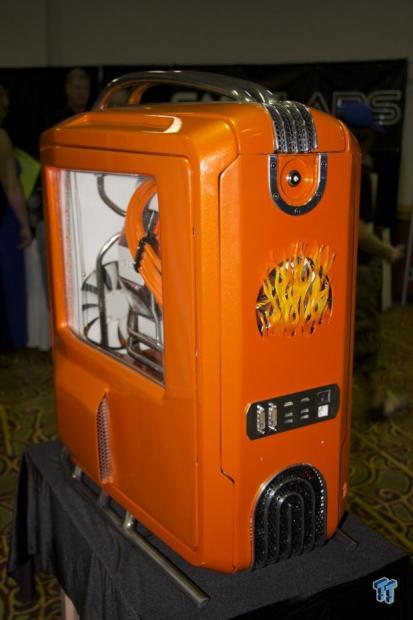 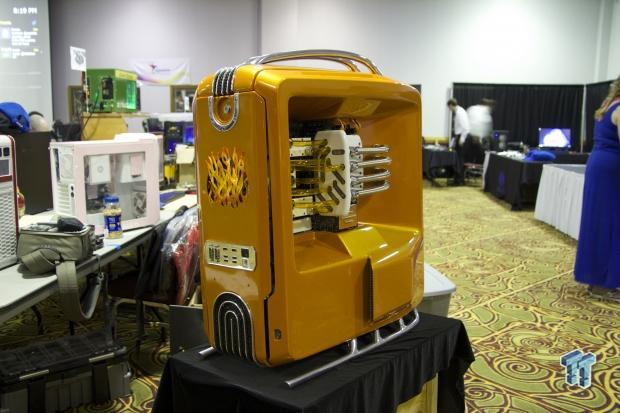 Finally, the case mod I've been waiting to see in person. We'll have more detail on this mod soon, but we'll give you a teaser here. This mod was started all the way back in 2012 and has easily 200+ hours into its build. The orange on the right is the proper color (taken without flash), but the case looks damn good in the reddish hue that the flash brings out. 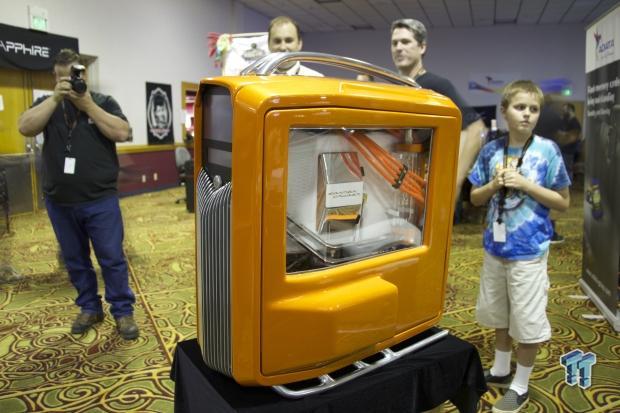 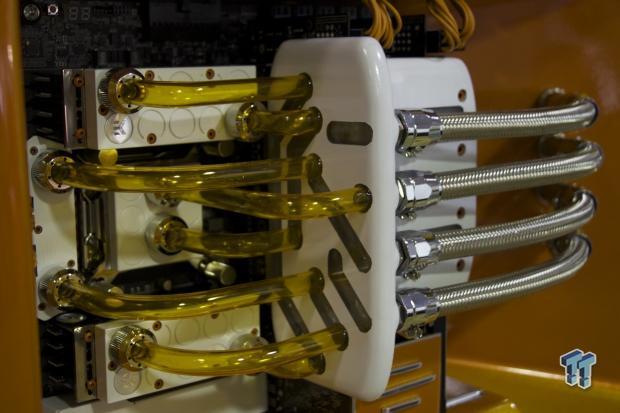 If you couldn't tell, the theme of this mod is taken from a hot rod type car. 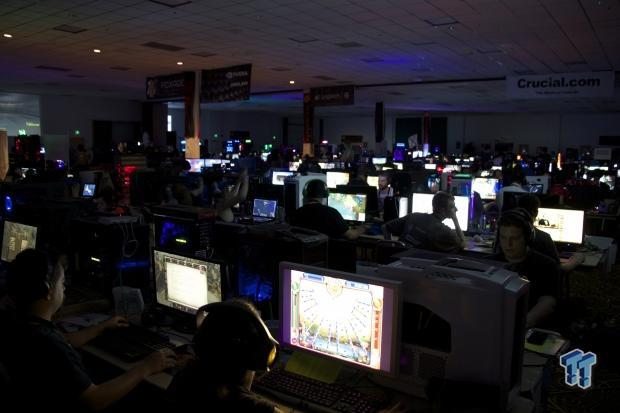 It's now about 1:30am, and the lights have been turned down. The room is still quite illuminated by the glow of all of these monitors and lit cases.

Tomorrow, we'll be covering more of the LAN, likely concluding our coverage with the CPU mag-hosted case mod competition. Until then, frag on.