According to an Intel PDF that Chinese tech site EXP Review got its hands-on, Intel's upcoming "Devil's Canyon" CPUs could easily do 5GHz on air-cooling. The new Core i7-4790K and Core i5-4690K CPUs will be more than just a clock speed increase when compared to the upcoming Haswell refresh chips. 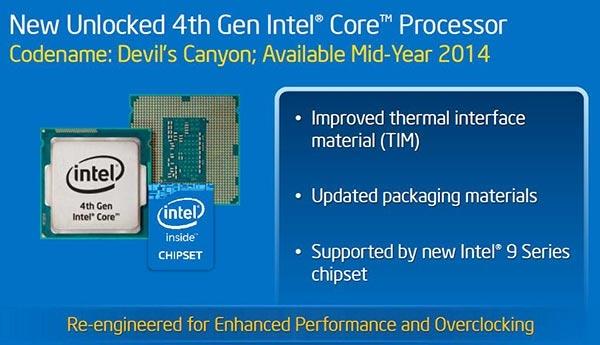 Both of the new Devil's Canyon-based chips will support 1600MHz DDR3 RAM, too. The biggest thing to take away here is that the new Devil's Canyon CPUs will be the first CPUs from Intel that will have a huge off-the-shelf clock speed - 4GHz. With a Turbo Boost of 4.4GHz, EXP Review and now myself, will bring the "air-cooled 5GHz era back". 5GHz shouldn't be a problem on air-cooling, but if you were to use an aftermarket cooler - such as a Corsair H110i for example, 5GHz and beyond shouldn't be a problem. We should expect Intel to better unveil its Devil's Canyon chips at Computex, which kicks off in just a couple of weeks time.