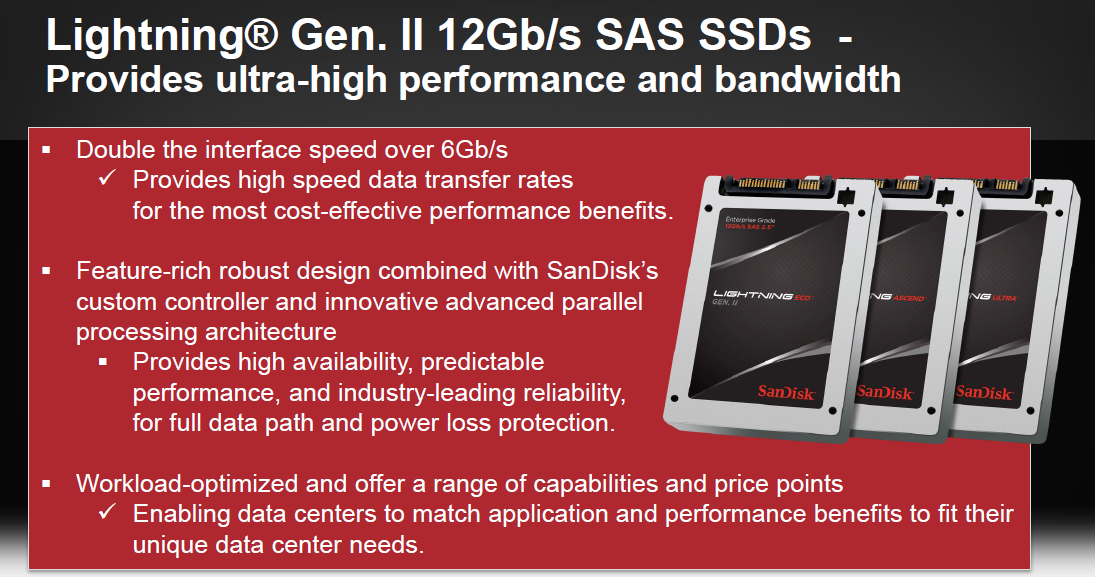 The new Lightning SSDs are two times the speed over previously available 6Gb/s SSDs, now providing the highest performance possible for web-scale data center application workloads. According to John Scaramuzzo, senior vice president and general manager of enterprise storage solutions at SanDisk, "Business data needs are becoming so performance-intensive that even applications that are already using SSDs need an additional boost." To address these ever increasing performance requirements from enterprise customers, SanDisk's new Lightning drives are capable of delivering up to 190k/100K IOPS of random read/write performance and sequential read/write speeds of up to 1000/600 MB/s for write-intensive application workloads.

For customers that require less performance but the maximum capacity, SanDisk also announced the first 4TB SSD, the Optimus MAX. According to Scaramuzzo, enterprise IT customers are "looking for a way to transition their data centers from HDDs to NAND flash, but have been forced to decide between cost and performance. The Optimus MAX eliminates the need for compromises." The new 4TB drives are now on par with what is available in the HDD space, at least in the high performance enterprise drive market. In the past, companies have relied on 15K rpm SAS spinning disks for mission-critical applications because they provided relatively high performance at a low cost. Now, with high-density SSDs that have higher performance like the Optimus MAX, enterprises are free to replace slower HDDs without paying a huge premium.