In the last few years, YouTube traffic has exploded thanks to faster internet connections and mobile device speeds increasing, and one of the biggest complaints is that YouTube seems to perform better on some ISPs than others. Today Google announced that it has released a performance report that outlines which ISPs perform better with YouTube. 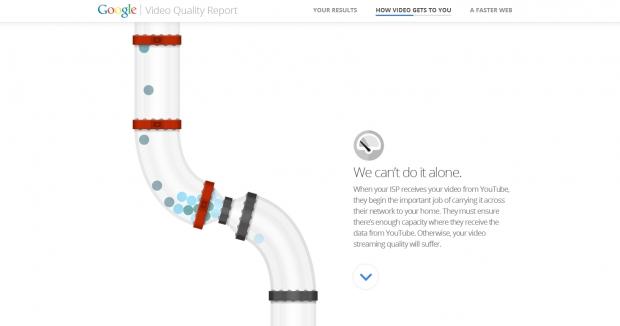 At the moment, Google's video quality report only shows a series of slides that aim to educate the public on how YouTube videos are delivered to you via CDN servers, but ultimately will feature a list of ISPs and will rate them on how they perform with YouTube traffic. If viewers on a specific ISP are able to watch 90-percent of YouTube Videos at 720p resolution at consistent quality without buffering, then that ISP will be branded as "YouTube HD Certified."

"We wanted to give users a measure of performance that they can truly understand," Google's Shiva Rajaraman said in an interview. "The other side is we felt this would be beneficial for ISPs too, because now they can describe their service and the various product offerings and price points they might have to their customers in a way that they can truly understand: You can access YouTube in HD on my ISP, or not."