Nokia has just unveiled a brand new case for the just launched Lumia 1020 41-megapixel Windows Phone. While a new case for a new phone is hardly anything to talk about, this case is different than any other you have ever seen. Knowing that the 41-megapixel sensor would attract shutterbugs, Nokia designed and released a case that effectively turns the Lumia 1020 into a compact digital camera. 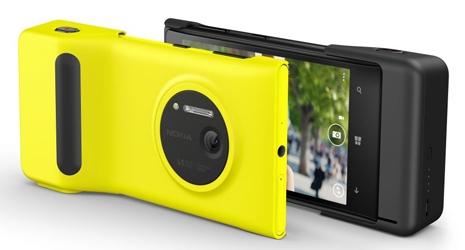 The Camera Grip clips onto the phone and gives the user the freedom to use the camera one-handed without the fear of dropping their brand new $300 smartphone thanks to a ergonomic palm grip and wrist strap. The grip features a two-stage shutter button that allows photographers to accurately focus before snapping the photo. 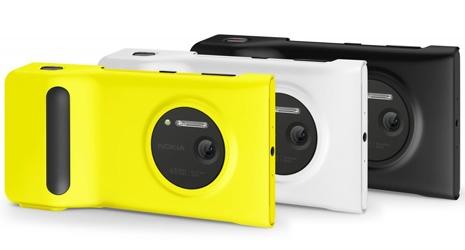 The grip is equipped with an additional 1020mAh rechargeable battery which almost doubles the battery life of your Lumia 1020. Also featured is a standard 1/4-20 threaded tripod mount on the bottom of the case which obviously lets you mount the phone to a stationary stabilization device. Like the actual phone, the case comes in yellow, black, and white and features the same refined and sleek curves of the Lumia 1020. The case will retail for $79 when it is released later this month.